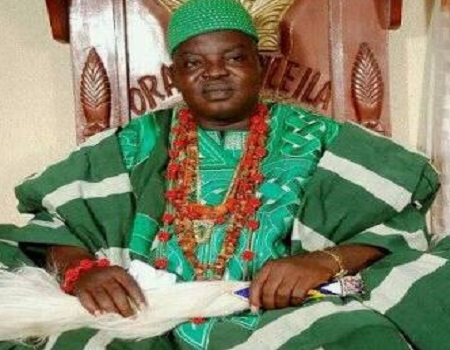 Controversy surrounding the approval of Iwo community as the location for the newly created Federal College of Education (FCE) in Osun took a new dimension on Friday when the Orangun of Ila Orangun, Oba Wahab Kayode Oyedotun apologised to the former interim national chairman of the All Progressives Congress (APC), Chief Bisi Akande.

It is recalled that jostle for the location of the FCE had culminated in scheming and intense lobby between the people of Ila Orangun and Iwo before the federal government finally settled for Iwo as the permanent site of the newly established college.

However, when indication emerged last week about the government’s resolve to site the FCE in Iwo, some aggrieved youths in Ila Orangun community embarked on a protest to Akande’s residence in the town to register their displeasure over the development.

But, in a letter dated 22nd of May, 2020 and personally signed by the Orangun of Ila Orangun, Oba Wahab Kayode Oyedotun, the monarch apologised to Akande regarding the protest by the youth.

According to the letter, titled “Apology to our Illustrious Son, Asiwaju of Ila Orangun” a copy of which was forwarded to Tribune Online in Osogbo, Oba Oyedotun underscored what he termed immense contributions of Akande to the socio-economic developments of Ila Orangun community.

The letter reads, “my attention is drawn to the recent controversy arising from the location of the newly established Federal College of Education in Osun State. The controversy led to the emergence of unimaginable protest by some youths of Ila Orangun indigenes against some prominent political functionaries, particularly the Asiwaju of Ila Orangun, Chief Bisi Akande.”

“Realising the tremendous contributions of Chief Akande to overall growth and development of Ila Orangun community either in the past or at present, it becomes morally justified to sincerely apologise to the person of Chief Bisi Akande for any embarrassment the action of his children might have caused him. We recognise you as our Illustrious son, whose role and position in the political space of Nigeria cannot be undermined.”

“It is our strong belief that the Almighty God will continue to uphold him and enrich him with robust health and happiness. On behalf of Orangun-In-Council, we want to plead once again that Chief Bisi Akande should not be demoralised and subsequently distracted from moving Ila Orangun to a greater height and laudable destination”, the letter concluded.