Fayose at 60: His doggedness stands him out ― Akeredolu 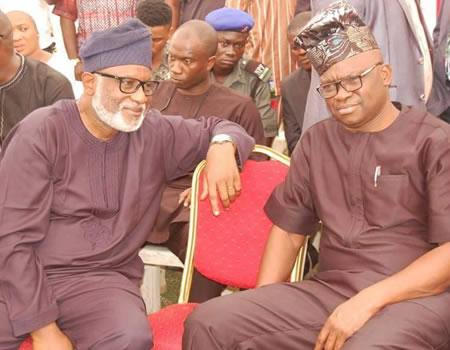 Akeredolu in a release signed by the State Commissioner for Information and Orientation, Donald Ojogo, described the former two-time governor of Ekiti State as a dogged and determined man in whatever he chooses to pursue.

The governor said, even though their paths have always been opposite politically, the relationship between him and Fayose had remained cordial.

Akeredolu said: “Life’s blessings have a special way of manifesting in God’s special ones. For my brother and friend, former Governor of Ekiti State, Peter Ayodele Fayose, the uncommon illumination of the Lord’s light of hope, His outpour of Favour and Grace are faith builders.

“This is one man whose doggedness stands him out; he pursues his choices with alluring courage and has always deployed ingenious potentials in achieving his goals. Fayose, undoubtedly, remains a strong force in Nigerian politics.

“Interestingly, our relationship which spans several years before we both ventured into politics has waxed stronger, defying the vicissitudes of partisanship and artificial political borders. This should and must be the spirit of men of honour whose desire is to serve the people.

“As APAGUNPOTE, as I fondly call him turns 60 today, it is our fervent prayer in our Sunshine State, aside from mine, that the good Lord keeps him stronger in faith, empower him with more strength in sound health, knowledge and understanding to continue to serve humanity.”