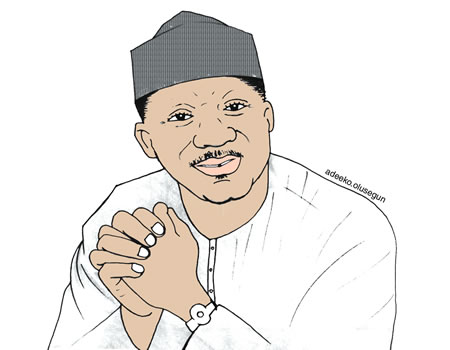 “Do not follow where the path may lead. Go instead where there is no path and leave a trail.”  -Ralph Waldo Emerson

This Thursday, October 16, 2020 to be precise, the second term administration of Governor KayodeFayemi will mark two years, having been inaugurated on October 16, 2018. It is not unusual to roll out the drums to mark such a milestone, especially in a state where performance is usually measured by what the people are able to “eye mark” as opposed to what they “ear mark”.

The two words: “eye mark” and “ear mark” were the coinage of the Catholic Bishop of Ekiti Diocese, Most Reverend Felix Ajakaiye, who explained that the former deals with development strides that the people can feel and see with their physical eyes, and the latter as the developmental strides that only exist in the realm of idealism or at the rumour mills.

Many are, however, of the opinion that Ekitikete, as they are fondly called, have a lot to “eye mark” in the two years of the Fayemi administration in the state, what with huge investments in urban and industrial development, physical and infrastructure development, which compete favourably with investments in human capital development, agric business, education and health care delivery among others.

Many would readily say that Governor Fayemi has been able to walk the talk, especially in translating his laudable ideas and policies into programmes and projects that have appreciable impact on the lives of the people. The comprehensive renovation of all primary and secondary schools in the state, construction and rehabilitation of some major roads and construction of 1,000kms of rural farm to market roads and the massive water projects in partnership with one of the development agencies are some of the projects designed to change the face of the state and improve the lots of the citizens.

While the administration has lined up scores of completed projects to be commissioned during the anniversary celebration, two of the projects billed for inauguration by the governor speak to the value restoration and impact making mantra of theFayemi government, in view of their peculiarities. The projects are the ultra -modernOja Oba market complex and newly completed secretariat buildings, inside the secretariat complex.

While the ultra- modern Oja Oba market complex was originally conceived by the Fayemi administration during his first term in office, the actual construction was carried out by his successor in office, AyodeleFayose, who achieved about 65 percent of the construction before the expiration of his tenure in 2018. The Oja Oba project could conveniently have passed for another abandoned project just like the secretariat buildings which construction commenced during the tenure of Engineer Segun Oni but was abandoned when the government was sacked by the Court of Appeal in October 2010.

By Thursday, these two projects will be commissioned by Governor Fayemi in a rare demonstration of statesmanship, having completed the two projects in a bid to put them to proper use, not minding the fact they were projects initiated by his predecessors in office. The governor will be commissioning these abandoned projects alongside the projects conceived by his administration which include four new model colleges, a newly installed asphalt processing plant, newly constructed Public Works Corporation Office building, among others.

This clear departure from the old practice where a new government comes on stream and abandons all projects of his predecessors, appears to be a unique thing Fayemi is bringing to the table of governance in the country. In defending the decision to complete the projects, the Governor in an interview, had told journalists that it does not make sense for successive governments to abandon projects initiated by their predecessors and office and funded by the tax payers money only to embark on new ones, which if not completed would in turn be abandoned by the succeeding administration to the detriment of tax payers.

“The important thing is these projects have been funded by Ekiti money not by a particular governor who embarked on the project. I may disagree with many of the things put in place by my predecessor but I don’t think it is in my place to abandon them because I am abandoning the resources of the state,” DrFayemi had told journalists during one of his tours of project sites.

Fayemi has quietly commenced the idea of injecting life into moribund or abandoned projects during his first term in office. It was during his first term in office that he rebuilt the Ikogosi Warm Springs resort; resuscitated the Ire Burnt brick industry in Ire-Ekiti. In his second coming, he has extended the Midas touch to the IkunDairy farm, which had been abandoned for many years. In partnership with Promasidor, the dairy farm, which targets production of 10,000 litres of milk daily, has commenced operation following injection of fund by Promasidor in a Public Private Partnership with the government. Added to this is the School of Agriculture and Technology, IsanEkiti, which was abandoned for four years by the immediate past administration. The institution has now concluded its recruitment exercise, has its faculty in place and added some new structures and equipment ahead of its scheduled resumption date for academic activities.

The need to safeguard against the huge wastage associated with abandoned projects, had necessitated the Ekiti State Transition law, which was duly passed into law in October 2019. The law which was a brain child of the Fayemi government made it mandatory for any new government not to abandon programmes or projects embarked upon by outgoing government for the development and stability of the state.

Observers of political developments in the state, no doubt, are on the look-out to see whether the governor will match his word with action regarding the abandoned projects that dot the state. Many definitely are curious to see whether Fayemi will dare continue with any project abandoned by the Fayose administration in particular for reasons that are obvious.

Governor Fayemi, no doubt, has disappointed this army of sceptics by scoring another first in the annals of the state- picking up abandoned projects for completion with as much zeal and commitment to the projects he initiated.  Thus, Fayemi, the current Chairman of Nigeria Governors Forum, is changing the narrative and setting new standards in political tolerance, accountability and good governance for all to emulate. The governor’s action is a simple lesson in political tolerance and maturity that will sink seamlessly into the consciousness of the people, especially aspiring leaders and public office holders, with attendant positive influence.

If this selflessness, coupled with prudent management of public fund is part of the legacy of Fayemi’s first 24 months in office, it is indeed a legacy worthy of accolades and deserving all the trappings of celebration. Let’s raise a toast to two years of positive impact.

When will agitations end?