Fayemi launches Amotekun in Ekiti, says outfit not to discredit other security agents 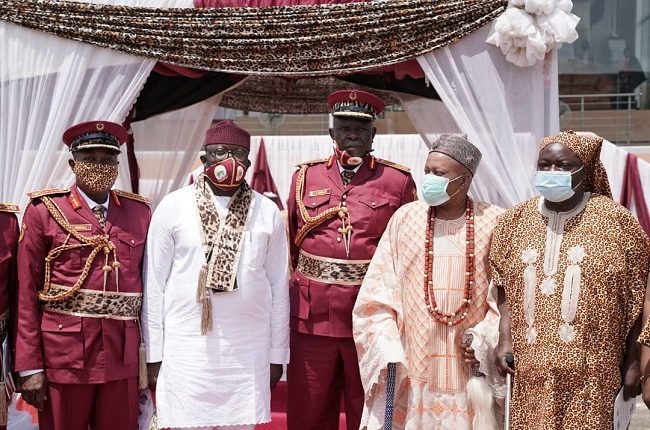 Ekiti State Governor, Dr Kayode Fayemi, on Monday, inaugurated the Ekiti State Security Network Agency, codenamed ‘Amotekun Corps’ saying it was not meant to replace or discredit other traditional security agencies but to collaborate with and strengthen their operations.

The Governor explained that the establishment of the security outfit was a child of necessity aimed to solve and address the various security challenges bedevilling the state and the southwest zone in particular and Nigeria in general.

Fayemi, who stated this at the event which also featured Passing out Parade of the newly recruited personnel of the outfit at the Ekiti Parapo Pavilion, Ado-Ekiti, the state capital noted that fighting crime was a collective responsibility which required input and collaboration of every citizen.

He said that the agency, in the course of carrying out its duty, would safeguard the human rights of the citizens of the state as enshrined in the constitution of the federal republic of Nigeria adding that all citizens are expected to go about their normal businesses without any fear of intimidation.

According to Fayemi, “The precarious security situation we are contending with nationwide has created palpable fear in the minds of our people, the current challenges of the proliferation of small arms and light weapons, kidnapping, assassination, cattle rustling, ritual killing, armed robbery, cultism and youth restiveness are daunting but surmountable.

“As a government, we are determined to put an end to this worrisome development of insecurity, we are encouraged and strengthened by the sense of responsibility and collective support that our people at home and in the diasporas give the Amotekun initiative.

“Amotekun is established to ensure the safety and freedom of not only Ekiti indigene or Yoruba people but everyone resident within and around Ekiti state. It is to protect and safeguard all within our state and indeed within our zone.”

Fayemi, who explained that the impact of Covid-19 had caused the delay in the launch, charged every member of the society to be vigilant and be wary of shielding criminals in their communities adding that cooperation of all was important at this time for the outfit to succeed.

While congratulating the corps officers, the governor enjoined them to shun any act that can tarnish or rubbish the image and purpose of the outfit. He further charged them to live above board and respect the oath they have sworn to.

Earlier, the Corps Commander, Brig-Gen. Joe Akomolafe (retd) warned all criminally minded people in Ekiti State to leave as the state was no longer safe for criminals, adding that the mandate revolves around the protection of lives and properties of the people.

The Commander, who reminded the Corps officers that they are under constituted authority, enjoined them to promptly report any situation for further directives.