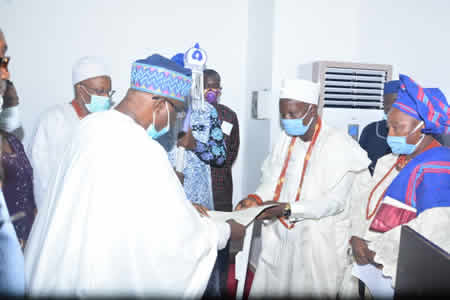 Fayemi who was represented by the deputy governor, Chief Bisi Egbeyemi, performed the assignment at the conference hall, governor’s office, in line with COVID-19 protocol which permits very few numbers of attendees and strict observance of physical distancing.

Oba Olatunde, who is a former Commissioner for Works and Infrastructure in the state, succeeds the last Onimesi, the late Oba Dare Adeyeye Oladimeji, who joined his ancestors on December 22, 2018.

The appointment of Oba Olatunde was approved by the State Executive Council at its virtual meeting on June 11 after satisfying all requirements stipulated by the Ekiti State Chiefs Law 2012.

Congratulating the former Commissioner on his ascension to the throne, Fayemi urged him to work harmoniously with his subjects to accelerate the development of the community.

The governor who admonished him to carry his people along when making decisions that will affect their welfare also called on him to be a father of all.

He said, “It gladdens my heart that the expected spirited struggle for the occupation of the exalted stool of Onimesi did not degenerate into uncontrollable controversies

“A tree can never make a forest. There is a need for collective responsibility if we all desire to have a society of our dreams.

“I also appeal to the good people of Imesi Ekiti to allow the spirit of oneness and sincerity of purpose in your support and cooperation with the Kabiyesi.”

Oba Olatunde who was joined by his wife, Olori Adebimpe Foluke, to receive the certificate and sceptre of authority, commended the state government for upgrading the Onimesi throne to first-class status.

He expressed gratitude to Fayemi for appointing indigenes of the town to key positions in government and provision of better infrastructure for sustainable use in his domain.

He promised to bring his experience, exposure, knowledge and wisdom to bear in administering the town and make it a model in Ekiti State.

The monarch who described his kingdom as a “cosmopolitan community” which hosts diverse ethnic groups pledged to pursue peaceful coexistence.

He promised to use the diversity in his domain as a launchpad for socio-economic development and sustainable growth in all facets of life.

Oba Olatunde called on the princes who contested the throne with him to join him in the process of taking the town to greater heights noting that the peaceful selection process would assist in the task.

The Chairman, Gbonyin Local Government, Mr Ayodele Fadumiye, explained that Oba Olatunde was unanimously selected by kingmakers adding that the process was transparent.

The council boss said the ascension to the throne has placed a daunting challenge on Oba Olatunde to ensure the realisation of the hope and aspirations of his people.