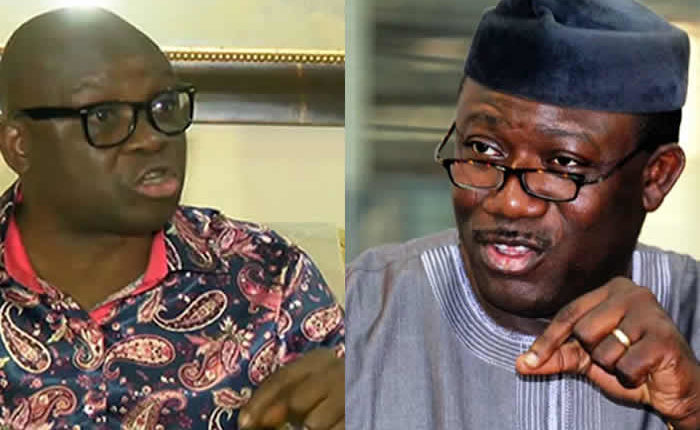 Both the Ekiti State goveror, Dr Kayode Fayemi and his predecessor, Mr Ayodele Fayose, on Saturday, condemned the violence that marred the Saturday’s Ekiti East Constituency’s by-election into the state House of Assembly where three persons were said to have lost their lives.

Fayem condemned, in strong terms, the violence, saying that “no one involved in the dastardly act would go unpunished.”

In a statement by the Chief Press Secretary to the governor, Yinka Oyebode, Fayemi asked the Commissioner of Police, Tunde Mobayo, to arrest all those involved in the violence “regardless of their party affiliation.”

Fayemi said: “This violence is most unwarranted and deeply disturbing. I have instructed the police authorities to fish out the perpetrators and ensure they face the music.

“Our condolences to the families that lost loved ones and those who were injured. Government would not relent in efforts to always ensure safety of lives and properties. We shall ensure all purveyors of violence are brought to book.”

While commiserating with the families of those that died, the governor reiterated the commitment of his administration to upholding the sacredness of life and sanctity of the electoral process.

Also, The former governor of the state, Mr Ayodele Fayose, condemned the killings, describing it as “clear evidence of state-sponsored terrorism against its own citizens who have rejected the party in government.”

Fayose, in a statement he personally signed, said the killings of the three citizens in Omuo-Ekiti were shameful and a clear indication that the people have rejected the ruling party.

He said: “I thought we have gone past this barbarism in Ekiti State especially when we are confronted with national insecurity to which the government has no solution.

“What was witnessed today in Omuo Ekiti is nothing but terrorism against the people of Ekiti, knowing that time has caught up with them and they are no longer popular.

“This will remain a guilt in the conscience of the perpetrators and their sponsors perpetually for killing their own people just because of a mere House of Assembly by-election.

“Most importantly, everything that goes round in life comes round. The perpetrators of this despicable act should therefore remember that there will be consequences for all actions because the blood of the dead will surely speak and fight back.

“To the police in Ekiti, they know what to do and the people behind all these, if only they choose not to look away. Ekiti shall be free again if we collectively confront and win this battle against fake apostles of democracy.”