Fayemi approves Amotekun bill, to be presented to assembly today 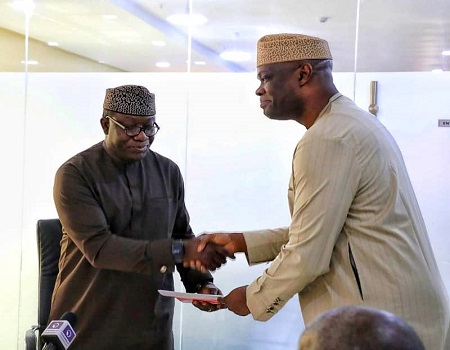 Ekiti State Governor, Kayode Fayemi with other members of the Ekiti State Executive Council sitting on Wednesday in Ado-Ekiti has approved the much-awaited Bill for a law to establish the Ekiti State Security Network Agency and Amotekun Corps.

The state’s Attorney- General & Commissioner for Justice, Olawale Fapohunda also disclosed that his office would transmit the bill to the Ekiti State House of Assembly today.

It would be recalled that the Ekiti State Ministry of Justice on Monday uploaded the soft copy of the draft of the proposed Amotekun law on its website requesting for public comments before it was passed to the House of Assembly today.

The Attorney General has, however, revealed that his office has been flooded with comments on various provisions since the Ministry of Justice called for public comments on the Bill.

He said most of the comments were very useful and would be compiled and forwarded to the House of Assembly.

Fapohunda said the majority of the comments received were on provisions relating to accountability and transparency in the administration of Amotekun Corps.

According to him, “There were lots of comments on the Independent Complaints Mechanism and the internal review process. We will certainly consider proposals for additional measures to prevent abuse of power and rights violations if those on the Bill are inadequate.

“I am however of the opinion that measures contained in the Bill are sufficient. If the course of implementation issues arise, we will respond promptly. Our overriding consideration is public confidence in the Agency”.