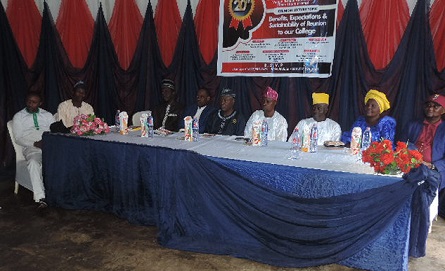 THE 1999 set of the Fatima College Old Boys’ Association (FACOBA), Ikire, Osun State has given back to their alma mater by renovating dilapidated structured in celebration of her 20th anniversary.

The principal of the college, Mr Odewale Abiodun Moses, who described FCI as a sister to Loyola College, Ibadan, owned by the Catholic, said, the old boys association has been trying its possible best to renovate the school to the level it is now.

“The ’99 old students have developed the school to a great extent, honestly, the old boys are very great, their milestone achievement cannot be overlooked, and would always be a point of reckoning for future generations,” Abiodun said.

He appealed to the Old Boys to help recruit English Language and Mathematics teachers, emphasising that the students will benefit from it directly, pending the time that government will do mass recruitment of teachers in the state.

“With seven arms of SS1, we cannot but plead that the burden on the few teachers of these major subjects be lessened, as there are only two of them each for the subjects in the whole school.

The National President of the association, Alhaji Ademola Akinromade, applauded the set for its great achievement and high level of performance.

He further decried the government’s action on the renaming of the school from Fatima College to Fatima High school with the accommodation of female students into the school from 2015.

“We are pleading to the government that we don’t want a mixed school. The college has always upheld a legacy and would continue to. Enough of us seeing young girls coming with protruding bellies to the exam halls, we desist the act of the government and we are taking a legal action to uphold the identity of our school.

“If about 5,000 Old boys contribute N2,000 to the development of the school, that is about N10 million, and when this is repeated for five years, it will be totalling about N50 million, that will change the face of the college for life,” Akinromade said.

The guest lecturer at the event, Dr Tunde Oseni, the Head of Department, Politics and International Relations, Lead City University, Ibadan, spoke on the theme of the reunion anniversary; “Benefits, Expectations and Sustainability of Reunion to our College.” 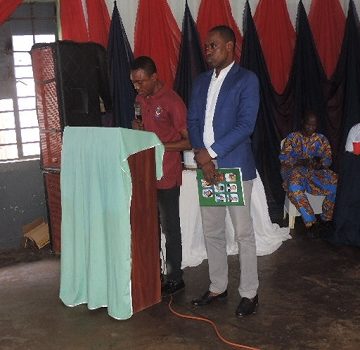 Dr Tunde Oseni(R) waiting to give the lecture while his citation is being read.

Oseni, who spoke on the benefits of holding a reunion, said that it is a home calling for impact making.

“When we reunite, it ushers an avenue to brainstorm on what we can collectively give back to our society.

“The essence of reunification is not to show off material wealth, but to have a meeting of the mind, specifically ‘consensus ad edum’, this will create a platform to gather mental, moral and material resources to make an impact,” Oseni said.

He also corroborated the need to contribute funds for the developmental project as mentioned by the national president, saying that ‘tokenism’ is the first step to uplifting an alma mater by the Old Boys association, as this will help greatly in improving the facilities in the school.

“Strategic advocacy is also one of the steps to sustainability, as it is only through this we can reclaim our college, for it to maintain its place of pride. Another is an honour to our teachers that must always be emulated. Optimism is also one key to sustain reunion,” Oseni added.

“We will also get our college back by all legal means, not by all radical means because that can go way too far than expected,” he said.

He also lauded the actions and projects of the ’99 set “Hall of Fame” old boys, encouraging them to do more.

In his own lecture, Mankind Olawale Oyewunmi of the University of Melbourne, Australia, who spoke on the theme: “The ideal Fatimarian,” decried some old students attitude of neglecting their alma mater after passing out of the school. 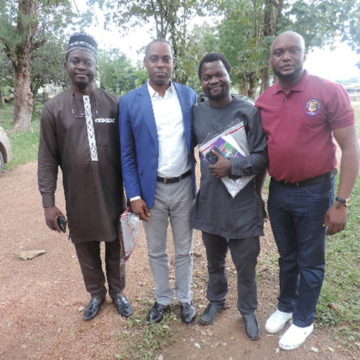 The guest lecturers and the ’99 set president, Prince Damola (R).

Mankind, however, highlighted the characteristics of being an ideal ‘Fatimarian’ as gratitude, diligence, persistence, and vision. He encouraged them to emulate all these.

Another guest lecturer, Mr Isaac Oluyi, a 1994 set member, also spoke against the neglect of the college by some old students, “the better way of resurrecting one’s memory of the alma mater is giving back to it,” he said.

“Mankind, myself and Dr Oseni will start an annual scholarship programme which will be tagged OLUSOY for nine students from the Departments of Arts, Science and Social Sciences, three from each class whose WASSCE fees would be sponsored,” Oluyi said.

In his own remark, the President of the ’99 set, Prince Damola Adepoju, said that he was able to organise his mates through the social media platforms and that they have been able to thrive through cooperation and sheer zealousness.

“We have been able to renovate the administrative block, construction of the fence of the school and donations for improved sporting facilities,” he said.

‘Accountancy a tool for national development, good governance in Nigeria’