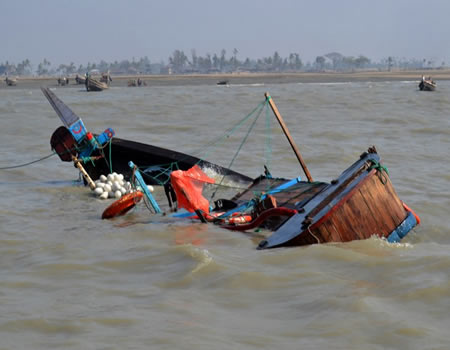 Niger State Emergency Management Agency (NSEMA) has confirmed the death of three people in a boat mishap at Wuya community on River Kaduna.

The Director-General of NSEMA, Alhaji Ahmed Inga, confirmed the development in an interview with the News Agency of Nigeria (NAN) in Minna on Saturday.

He said that one Malam Yahaya Hamza and two of his sons died in the boat mishap while returning from their farm.

Inga said that the incident occurred on August 30 on River Kaduna at Wuya along the Bida-Mokwa Road, adding that the dead people hailed from Edati Local Government Area of Niger.

According to Inga, the man who peddled the boat survived the accident.

The director-general noted that the bodies of the dead people had been recovered and buried.

He advised boat operators to take necessary precautions while using their boats, noting that the government had taken measures to provide live jackets for people travelling on boats.

One killed, 10 injured in petrol tanker explosion on Abuja-Kaduna highway