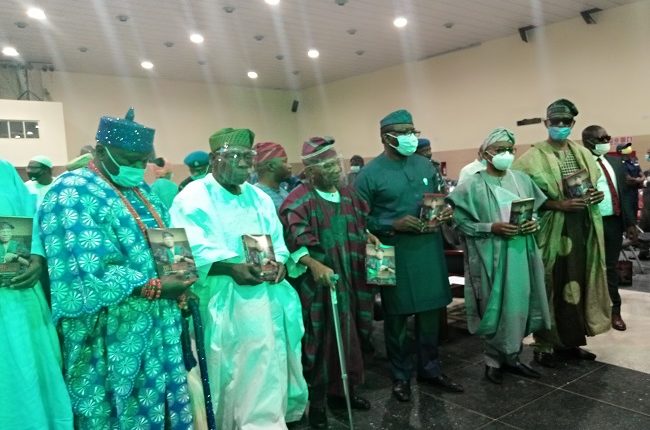 Leader of Pan Yoruba sociopolitical group, Afenifere, Pa Reuben Fasoranti, on Friday expressed fear over the future of Nigeria as a nation.

Fasoranti who stated this in Akure, the Ondo State capital, during the launch of his book entitled “My Life, My Legacy (Service with Integrity and Excellence), to mark his 94th birthday, complained about the continued insecurity in the country, unemployment, famine and other challenges confronting the country and described them as eroding the root of the Nigerian nation.

Fasoranti lamented that all these issues had been ignored by the Nigerian government and are being treated with nonchalance or swept under the carpet.

He called on those in charge of the leadership of the country to find a lasting solution to all the challenges to make life easier for a common man.

The nonagenarian said: “At over 94 years, I am still here with you because of the grace of God and even though as an individual, I am fulfilled, I regret to say that all is not well with the country.

“No thanks to the insecurity of life and property, worsening unemployment of able-bodied citizens, leading to all manners of crimes, threatening famine which is a conspiracy between mother nature and the ravaging of the land by the marauders and so on.

“I call on all concerned to quickly arrest all these before they tear the country apart. Beloved countrymen, this is not the Nigeria of my, nay our dream.”

Speaking on his dream to have an enduring legacy, the Afenifere leader said after his adventures, he has decided to establish a democratic institute to inculcate and entrench desired political values and discipline to practising and aspiring democrats.

He also said his dream is to establish a public digital library to articulate and archive critical events of the country’s history; pre-colonial, colonial, and post-colonial

He said: “I have served the people at both local, state and national levels and shown the way to selfless services. I have experimented with western education to set examples. I have also made some input into human capacity building.

“Of late, however, it occurred to me that I must have a project as a centre to harness and concretise all these; something unique, more lasting, modest, noble and useful in lifting up humanity.

“That is the essence of my using the opportunity of the presentation of “My Life, My Legacy” to raise funds to establish a democratic institute to inculcate and entrench desired political values and discipline to practising and aspiring democrats.

“Education advancement for the Yoruba race and Nigeria through encouraging value-based training and sponsorship of scholarly activities, awards, researches, conferences, and bills at the national assembly.

“The establishment of a public digital library to articulate and archive critical events of Nigeria’s history; pre-colonial, colonial, and post-colonial.

“Time is no longer my friend, though, but with you, great and understanding people, time can still be bought to get the project accomplished before my time is finally out.”

Former President Olusegun Obasanjo, who is the chairman of the launch, noted that the dream of the Afenifere leader on Nigeria had not been fulfilled but urged him not to write off the country, saying there is still light at the end of the tunnel.

He assured that dream of the patriotic leaders on Nigeria would still come to reality, saying all they had laboured for would not go down the drain.

Obasanjo said: “Papa Fasoranti, l feel your sense of frustration as you are getting to your departure and you are wondering that, is this the Nigeria of my dream that I had laboured for?

“The books you’re launching today is one of the legacies you’re leaving behind and coming generation will refer to it.

“We hope for the best for Nigeria. We will continue to follow your footstep and examples.

“My vision is that you will see the Nigerian of your dream before you depart, the Nigeria you’ve laboured for.

“Our founding fathers didn’t wish for a disintegrated Nigeria but a progressive and united Nigeria. In your lifetime, we will achieve the Nigeria of your dream.”

National leader of the All Progressives Congress (APC), Senator Bola Ahmed Tinubu, commended Fasonrati for his steadfastness and dedication to progressive and worthy causes and for his legacy of service to Nigeria and Yorubaland.

He said Fasoranti had continued to serve as a moral guide to many of the Nigerian leaders and political class, describing him as an accomplished educationist, astute progressive politician, elder statesman and die-hard Awoist, who devoted his life to public service.

Tinubu, who was represented by the Osun State governor, Mr Gboyega Oyetola, said “as Afenifere leader, Pa Fasoranti effectively contributed to and enriched the discourse on regional integration, nation-building and good governance, and with a benefit of hindsight, advocated a pure federal principle as the basis for peaceful coexistence in an indivisible and united Nigeria.

“His leadership role in the clarion clamour for true federalism, fiscal federalism and the separation of power vis-a-vis federal and state relations had been very inspirational and exemplary.”

He, however, appreciated the elder statesman for the pains and initiative for documenting his life trajectory and legacies for the younger and upcoming generation, saying his pet project which is aimed at promoting a democratic institute will inculcate and entrench desired political values and discipline in the practising and aspiring democrats.

Governor Rotimi Akeredolu of Ondo State, in his remarks, described Fasoranti as an icon of the nation who used most part of his life moulding the young ones.

“Many of your students are proud of you because you made an impact on their lives. You are our pride in Ondo State. You are not only the pride of Akure town, but Ondo in general. Before you go, this country will be good,” Akeredolu said.

Chairman of the Governors’ Forum and Ekiti State Governor, Dr Kayode Fayemi, who was also one of the students of the celebrant, assured the nonagenarian that his dream of establishing a democratic institute would come to reality in his lifetime.

Some of the other dignitaries at the event include former Secretary to the Government of the Federation, Chief Olu Falae; foremost historian, Professor Banji Akintoye; former Governor of Kwara State, Chief Cornelius Adebayo; former Governor of Ogun State, Chief Gbenga Daniel; Dr Tokunbo Awolowo Dosunmu, who was represented by the Editor, Saturday Tribune, Dr Lasisi Olagunju, among many others.