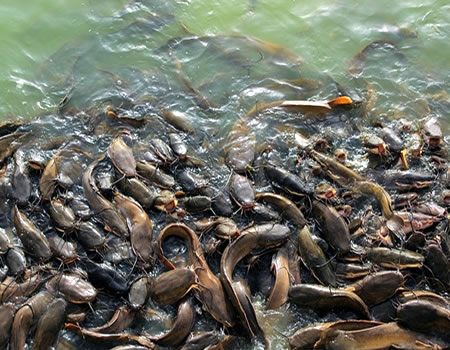 AS part of its plans to bolster fish production, the Nigeria Farmers Group and Cooperative Society (NFGCS) has revealed plans to embark on a N20 million dam project.

The project is expected to enhance irrigation activities on farmlands, as well as upscale fish production.

National Coordinator of the group, Mr. Retson Tedheke stated that much was expected of farmers, despite having next to nothing in terms of an enabling farming environment and infrastructure.

Revealing plans for the project, he said the dam, which will start functioning in April, is an integral part of the group’s structure to achieve a unified farming system.

He said: “The dam itself, we want to dump 2 million fingerlings in the next two months. We are creating a dam from a natural water path.

“When we blocked the water in November 2019 we did not know it will last this long. There is still enough water there for all we are doing on the farm because we do irrigation farming based on that water.

“Now, what we are doing is to continue the dam to three kilometers. In the next six months, we will begin a massive harvest of fish. We are not harvesting these fish direct for the market, rather we will harvest and dry them, process and package them for local consumption and export”

“The dam is part of our all structure that helps us to actualise our dream of developing an integrated farm structure. It is going to be operational by the end of April 2020. The dam is going to cost us about N20 million to get it ready. We don’t have any support from anywhere.”

NIRSAL reveals plan to lift 8 million farmers out of poverty