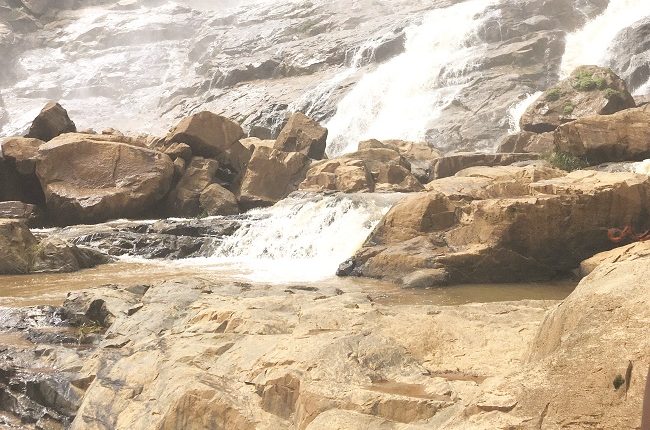 FARIN Ruwa Falls is a waterfall found in Wamba Local Government Area of Nasarawa State. It is among the highest waterfalls in Nigeria. It is significant among Africa’s falls when the total height covered by the waterfall is considered.

During its descent from the Jos Plateau, the water drops a total height of about 150 metres (492 ft). This drop is higher compared to the more popular Victoria Falls, which drops a height of around 108 metres (354 ft) during its descent

However, Farin Ruwa has once again attracted the attention of the Federal Government with the recent working visit of the Minister of Information and Culture, Alhaji Lai Mohammed.

The minister, who was led by the deputy governor of the state, Dr Emmanuel Akabe and Commissioner for Works, Philip Dada on the visit, was also accompanied by Director-General of Nigerian Tourism Development Corporation (NTDC), Fololorunso Coker and Director-General, National Institute for Hospitality and Tourism (NIHOTOUR), Nura Sani Kangiwa.

The two-day visit gave the federal and state governments an opportunity to brainstorm on how to develop the destination. Although it holds huge potential for the state, lots are still required in terms of infrastructural provisions that will make the site attractive to tourists.

At the first day interactive session, the governor of Nasarawa State, Abdullahi Sule stated that the potential in the Farin Ruwa Waterfalls go beyond tourism with its capacity for over 40 megawatts of electricity and 40,000 acres of irrigation land for agriculture.

He added that when he visited the tourism destination and discovered that access road was the biggest challenge, the state immediately awarded the N3 billion contract for road infrastructure.

“The government of Nasarawa State believes that to reap the gains of tourism, there is need to develop basic infrastructures in different destinations and sites.”

The state, therefore, pledged its readiness to set the enabling environment for willing investors into any of the identified opportunities.

The minister, in his response, equally highlighted the huge potential of Nasarawa State in tourism, stressing that the governor got it right with the realisation that the major obstacle to tourism is infrastructure and commended the move of the N3 billion access road to the waterfall.

“With this, the governor has rediscovered the potential in the site and it will soon become another Nollywood village giving the scenic description of the waterfall the hydropower dam and the beautiful vegetation.

“The vision of the governor to see that tourism is promoted in earnest is laudable because tourism involves many endeavours and provides so many jobs for people,” the minister stated.

Speaking after arriving at the Farin Ruwa, the deputy governor of the state, Dr Emmanuel Akabe said “we have been looking forward to a day like this. This is an area that we are planning to turn to tourists’ haven not only for the Nasarawa people but for Nigerians, Africans and the world as a whole.”

The deputy governor is optimistic that in another five years, the project would have been ready for tourists. Considering the distance from the major road, he expressed the possibility of having a helipad bringing in tourists.

In response, the Minister of Information, Lai Mohammed pointed out that one of the keys to opening tourism potential anywhere in the world is infrastructure.

He insisted that it was imperative for government to invest in infrastructure so that “this wonder of the world will be made available to everyone.”

While emphasising that the government cannot do it alone, he, however beckoned on the private sector to invest in building infrastructure around the destination.

“I also want to call on the private sector to look at how they can make use of the funds they have for corporate social responsibility and invest in infrastructure such as roads that will lead to places like this.

“Without infrastructure, we are going to lose to the world, this kind of tourism site,” the minister stated.

Also urging legislators from the state to invest on the project and be remembered for it, the minister, on behalf of the Federal Government, pledged to explore any available funds such as those from the United Nations World Tourism Organisation (UNWTO) under the rural tourism to fund the project.

“This is the time for the private sector to come because from this location, it will be almost impossible to make a day trip which means if you bring your family here, you will likely want to keep the night. Therefore, motels and recreation centres will be very viable here.

“We are all glad we have come and see the wonders of the world. In other parts of the world where there are good roads, power, and this place will be 24-hour alive.

Meanwhile, the Director General, NIHOTOUR has offered to train 13 young men and women from Nasarawa State, one from each Local Government area as tour guides.

In spite of the huge investment in the water sector by the government and international organisations, water scarcity has grown to become a perennial nightmare for residents of Abeokuta, the Ogun State capital. This report x-rays the lives and experiences of residents in getting clean, potable and affordable water amidst the surge of COVID-19 cases in the state…Farin Ruwa Waterfalls  Farin Ruwa Waterfalls

The Lagos-Ibadan railway was inaugurated recently for a full paid operation by the Nigerian Railway Corporation after about a year of free test-run. Our reporter joined the train to and fro Lagos from Ibadan and tells his experience in this report…Farin Ruwa Waterfalls Farin Ruwa Waterfalls