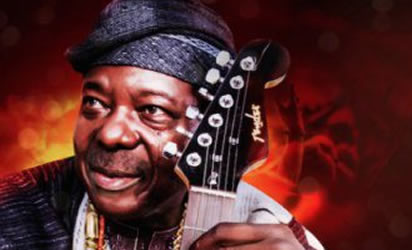 Some fans of legendary juju maestro, King Sunny Ade, in Abuja, have congratulated him on his induction into the “Hard Rock Café Music Memorabilia’’ which held in Lagos on Wednesday.

The News Agency of Nigeria (NAN) reports that the induction was coming three weeks after the veteran entertainer was honoured at the 2016 AFRIMA awards.

Ozioma Ibezim, the manager of Hidden Talent Agency, told NAN that she was happy for him because his songs had brought joy to many Nigerians.

“I love king Sunny Ade because he is a true African entertainer who is very creative.

“His album entitled; Seven Degrees North was amazing and I still have the CD in my living room.

“God bless him as his name lives on.’’

Joseph Bawa, a civil servant said that he was happy for the singer, adding that the induction couldn’t have come at a better time.

“I am happy that he is being greatly rewarded for his works.

“It is amazing that an inspiring entertainer like him is known by many generations.

“It couldn’t have come at a better time because he just celebrated his 70th birthday making it the perfect year to celebrate his talent and wisdom,’’ he said.

Toke Makinwa, an Abuja based singer, said that she was happy with the legend’s achievements so far and hoped to be recognised like him someday.

“His life story is inspiring and his talent is admirable. I am glad and happy for him, especially for being recognised in such a manner.

“The Hard Rock Café Music Memorabilia is a very big deal where many are called, but very few are chosen.

“He inspires many singers and I hope to get half of the recognition he has gotten someday.

“May God continue to bless him.’’