Family of 7 nabbed for kidnapping in Ogun 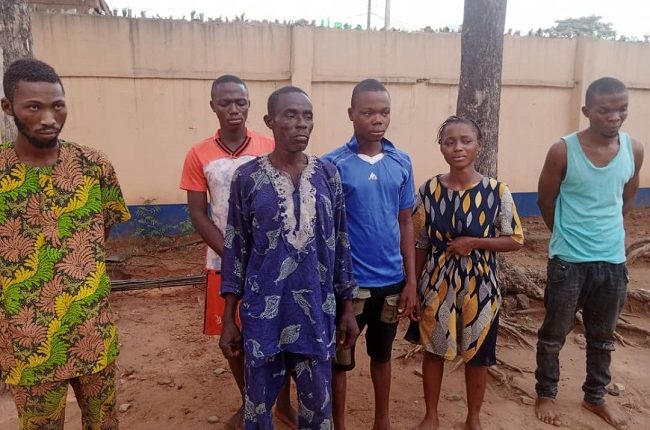 The operatives of the Ogun State Police Command have arrested a kidnap syndicate made of members of the sa’ family.

They were arrested following a series of kidnapping activities within Sagamu and its environs in 2020.

The State Commissioner of Police, CP Edward Ajogun, was reported to have ordered that the perpetrators of the dastardly act be fished out, according to a release by the Command’s Public Relations Officer, Abimbola Oyeyemi.

The Area Commander and all Divisional Police Officer in Sagamu swung into action and arrested seven members of the same family.

Oyeyemi said the DPO Sagamu Division, CSP Okiki Agunbiade, his crack detectives with the support of the Sagamu Security Council under the headship of Akarigbo of Remoland, Oba Babatunde Ajayi, embarked on Intelligence and technical based investigation which led to the arrest of one Oweniwe Okpara from Delta state and three of his children namely; Samson Okpara, Bright Okpara and Eze Okpara as well as one Christian Ishaha who accommodated them.

They were all arrested at the Ajaka area of Sagamu for their roles in the kidnap of 8 persons at different times in Sagamu and other areas.

The PPRO said in the course of the investigation, it was discovered that three other members of the family constituting the criminal gang namely; Godwin Okpara, Godspower Okpara and Mathew Okpara are the armed squads of the syndicate, while Samson, Bright and Eze Okpara were the ones spying on their targeted victims.

The victims of the syndicate were one Okechukwu Onwubiko who was kidnapped on the 4th of June 2019; Omotayo Sobowale on the 16th of June 2020, while one Lamidi Akeem was abducted by the same gang on the 20th of July 2020.

Having heard about the arrest of their father and their 3 siblings, Godwin, Godspower and Mathew Okpara ran to Delta state with their operational car and arms where they were subsequently apprehended by the Delta State Police Command after carrying out another kidnapping in the state.

The camp used by the syndicate in the forest in Ayepe-ijebu in Odogbolu Local Government Are, where their father used for farming before venturing into the illicit business was discovered by the Police.

The CP was said to have expressed satisfaction with the intelligence and painstaking investigation of the detectives.

He reiterated the stand of the Command not to relent in accomplishing the onerous task of providing adequate security for the good people of Ogun state.

He therefore appealed for cooperation of the general public in the area of giving useful information that will assist in eliminating criminals from the entire state.

The British Parliament at the Westminster Hall held a debate on ‘e-petition 554150, relating to Nigeria and the sanctions regime’ on Monday. The government of the United Kingdom has however responded…Family of 7 nabbed  Family of 7 nabbed

The surprise visit made on Friday night by the leaders of the ruling All Progressives Congress (APC) to former President Goodluck Jonathan at his residence in Abuja triggered a stir in the major political camps, resulting in at least four possible theories..Family of 7 nabbed  Family of 7 nabbed