Arts and Culture
By Akintayo Abodunrin On Dec 20, 2020 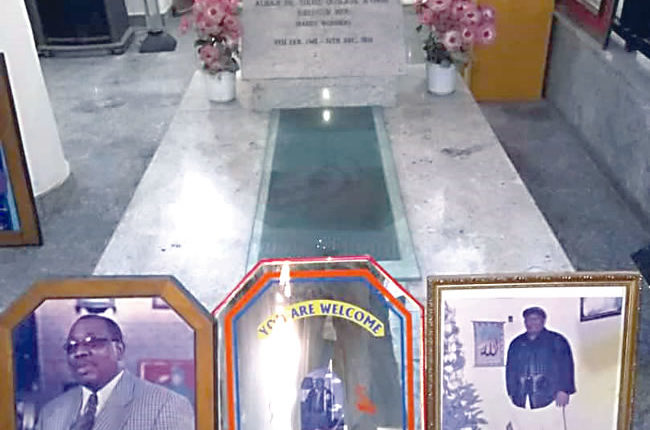 ALHAJI Sikiru Ayinde Barrister has been dead ten years but still lives in the hearts of those who love him. They — wives, children, siblings, associates, mentees and people of goodwill, converged on his Fuji Chambers, Isolo, Lagos home on Wednesday, December 16 for his 10th memorial prayers.

In keeping with this COVID-19 time, it wasn’t a big do. It mainly featured prayers for the continuous repose of his soul from Islamic clerics. People began coming to say prayers by his tomb in the sitting room of his house as early as 10 am.

By 1 pm when the prayers proper started, there was a sizable assemblage of people including another Fuji icon, General Kollington Ayinla, K1 De Ultimate (who recently mended fences with Barrister’s family) and Muri Thunder.

Speeches were very scarce at the event, but prayers were aplenty.  Expectedly, people trooped after both Kollington and K1 when they went to pray at Barrister’s tomb, with the latter even dropping some lines alongside his mentor’s first son, Razak.

Coincidentally, Barrister’s 10th anniversary fell within the week when the Bobo Omotayo-led 3101 Media’s ‘Fuji: A Opera’ happened. It was a week-long showcase to deconstruct fuji music from “its enigmatic past and reimagine it for a new generation of music fans and culture lovers” that held at the Alliance Francaise, The Mike Adenuga Centre, Ikoyi.

Kollington who revolutionised the genre in the 1970s by introducing Bata drums was among early viewers of the exhibition, a significant component of the programme that also featured an artist talk and concert.

Kollington was walked through the exhibition by Omotayo who chronicled the genre by offering anecdotes on its history. The ‘Ijo Yoyo’ crooner moved from piece to piece and gave positive remarks on the exhibits.

One of the day’s highlights was Kollington’s acknowledgement of his bosom friend, Barrister as the creator of Fuji and himself as a close second in that hierarchy.

As soon as he finished viewing the exhibits, Kollington sat briefly for an interview and answered every question with a unique burst of warmth and grace.

K1, who also visited the exhibition arranged chronologically, got the same treatment from the organisers. They walked him through the exhibits, and being that the late icon mentored him, he was able to correct some identification errors they made.

‘Fuji: A Opera’ also featured an artist’s talk tagged ‘An audience with KI De Ultimate & other Fuji Icons’ where they spoke about the genre’s past, the present and future.

A glorious era in Fuji music ended on  December 16, 2010, when the fuji icon passed.  It was the end of a riveting musical odyssey that began some five decades before and saw the supremely gifted vocalist release about 60 studio albums and innumerable’ live records’.

Yvonne Ebbi boosts women with Finding Your She Spark