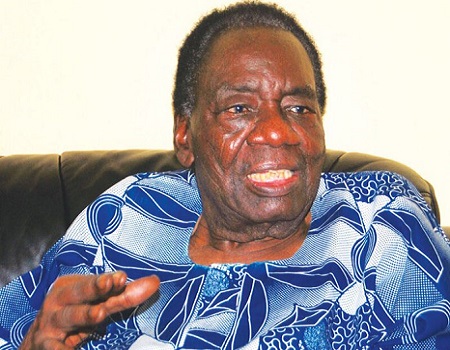 Second Republic Minister of Justice and Attorney General of the Federation, Chief Richard Akinjide, was on Thursday privately buried in Ibadan, the Oyo State capital.

Tribune Online gathered that the funeral, which was attended by members of his immediate family, was held at The Chapel of Saint Peter, a chapel located within The Rock mansion of the late legal luminary.

A statement signed on behalf of the family by his son, Abayomi Akinjide, said the funeral was done in consultation with the Archbishop of Ibadan Anglican Communion and the Oyo State government.

He explained that the private nature of the funeral was occasioned by “the prevailing global public health crisis” brought about by the coronavirus pandemic.

“Our beloved patriarch, Chief Richard Akinjide, who passed on peacefully to glory on 21st April, 2020, was laid to rest on Thursday, 13th August, 2020 after a private funeral service by the family at The Chapel of Saint Peter, The Rock, Jericho, Ibadan, within the family estate.

“This was done in consultation with the Archbishop of Ibadan Anglican Communion and the Oyo State government due to the prevailing global public health crisis.

“At the appropriate time, a celebration of life church service and public events will be held in his honour.

“The entire Akinjide family would like to thank the federal and state governments, our royal fathers and traditional institutions, the legal community comprising the Bar and Bench, our friends and well-wishers for their prayers and support,” the statement said.