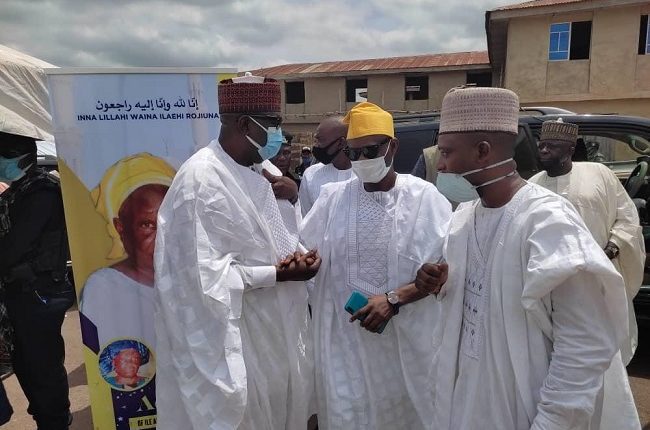 Chief Imam of Ijomu Oro Central Mosque, Alhaji Bashir Ibrahim Adewara, has urged the children of late Princess Awawu Ajibike Adedoyin to sustain and build on the good legacy left behind by the deceased.

The Islamic cleric made the call while leading a Fidau prayer for the late Princess Awawu at Ijomu Oro town square in the Irepodun local government area of Kwara State, on Thursday.

Imam Bashir, who described late Princess Awawu as amazon for women emancipation, said that the late community leader dedicated much of her lifetime to the betterment of people.

“Mama was not just a great mother to her children alone but to everyone that crossed her path.

Expressing his condolence, a chieftain of All Progressives Congress (APC) in the state, Hon. Mashood Mustapha said that late Princess Awawu, “would be missed by all not only by her biological children because she saw everyone as her children and always there to admonish us. So, we are going to miss her great admonishment.”

Mustapha also said that one of the lessons late Princess Awawu taught them is to always be upright, steadfast and courageous in life.

He, however, prayed to Allah to forgive all known and unknown sins of Mama, grant her Aljanah Firdaous and give children, family fortitude to bear the irreplaceable loss.

Talking about some significant impact of late Princess Awawu when it comes to community and human development, one of the biological children of the deceased who also holds a chieftaincy title of Oloriewe of Oro town, Alhaji Raheem Adedoyin, said that “Princess Awawu’s sense of focus and service to humanity would be greatly missed not only by his children but by many that had crossed her path”, noting that many used to call the deceased “best friend because once you come in contact with her, you would love her and become 5 and 6.”

Oloriewe, a media guru, also talked about some values inherited from his mother, which he said included; hardwork, focus, discipline and love of God.

He charged the entire family and Oro people, in general, to carry on such legacies as service to the community and people.

In spite of the huge investment in the water sector by the government and international organisations, water scarcity has grown to become a perennial nightmare for residents of Abeokuta, the Ogun State capital. This report x-rays the lives and experiences of residents in getting clean, potable and affordable water amidst the surge of COVID-19 cases in the state.  Family, friends extol virtues of Late Princess Awawu

2Baba, Chike to perform as NGX group launches ‘The Stock Africa Is Made Of Campaign’