When breast milk is no longer enough to meet the nutritional needs of the infant, complementary foods should be added to the diet of the child. SADE OGUNTOLA xrays what mothers are expected to do to give a good nutritional development of their babies. 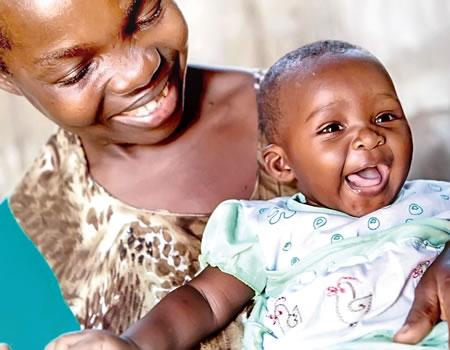 M RS Amina Henry (not real name) had just relocated  to Ikorodu. She brought her son who was six months to the Otumera Primary Health Care, Ilaje Otumera, for Vitamin A supplement when the health workers noticed that her son was unwell. He had severe acute malnutrition.

Mrs Henry said he was not exclusively breastfed for the first six months. He was not sucking the breast well, so she started to give him pap since he was three months.

With a new resolve, Mrs Henry after being counselled  on appropriate complementary food decided to change her baby’s diet. She was shown a food chart for children by Princess Eke.

Mrs Henry said, “She told me, even if  we could not provide all the food items,  she would at least have beans, crayfish, yam, potato, vegetables, cocoyam, red oil and rice, adding that we could  combine a little at a time and feed the  baby, little by little.”

Returning to the clinic months later, “I couldn’t believe what I saw when she came back atfter 9 months for measles immunisation. The baby can walk now,” Princess Eke added.

Otumera Primary Health Care, Ilaje Otumera is one of the many Primary healthcare centres, private hospital and traditional birth attendant homes in 10 Local government areas that Lagos State Government in collaboration with Alive and Thrive, a project managed by FHIs 360 to ensure malnutrition is reduced to the barest minimum.

Over the past three years, they have been promoting infant and young infant feeding practices. The 10 local government areas were picked after a need assessment indicated malnutrition was rife in its many communities.

Chronic malnutrition early in life leads to stunting, which prevents children’s bodies and brains from growing to reach their full potential. The damage caused by stunting is irreversible and has far-reaching consequences, from diminished learning and school performance, to lower future earnings.

Of course, different stakeholders, including breastfeeding guardians, community volunteers, health workers, as well as community and religious leaders were involved in this intervention to promote early initiation of breastfeeding within one hour of birth, exclusive breastfeeding and adequate complementary feeding for babies after six months.

From the age of six months, a baby needs more energy and nutrients than can be provided by breast milk alone. At this age, a baby’s digestive system is mature enough to digest a range of foods. This gap increases with age, demanding an increasing contribution of energy and nutrients; especially iron, from foods other than breastmilk.

WHO recommends that infants start receiving complementary foods at 6 months of age in addition to breast milk, initially, 2-3 times a day between 6-8 months, increasing to 3-4 times daily between 9-11 months and 12-24 months with additional nutritious snacks offered 1-2 times per day, as desired.

The foundations of good nutrition include exclusive breastfeeding  for the first 6 months of a child’s life, and continued breastfeeding to age 2 or beyond; facilitating timely, safe, appropriate and high-quality complementary foods; and providing appropriate micronutrient interventions.

Before the intervention by Lagos State Ministry of Health and Alive and Thrive project, health workers only asked mothers with babies with low weight to buy infant formula and add  this to babies’ food. Some end up buying milk meant for adults when they could not afford infant formula.

Nurses at the health facility now conduct regular food demonstration classes to show mothers how to make appropriate foods for their babies; they allow the mothers to also  try their hands on making  varieties of meals based on a food chart conspicuously displayed in the waiting hall at the PHC.

She added, “Our mothers have been very cooperative. Since we started to preach more on locally available made foods, our children have improved greatly.

“We have about five children that have been revived from malnutrition. With just N1,500, they can prepare Tombrown, the thick brown weaning food made from a combination of yellow corn, millet, guinea corn, groundnut and soybeans. This can last them for three to four weeks unlike the infant formula that is more expensive.”

Mrs Bakare, however, said seasoners like Maggi and pepper should not be added to complementary feeds for babies. Also, the food must be soft and without lumps to ensure easy swallowing.

She emphasised on hand wash and maintenance of hygiene in the preparation of these meals, stressing, “we do not encourage buying food for children from outside because of hygiene purposes and to prevent diarrhoea infections.”

According to Mrs Bakare, babies should be served hot food and while feeding them, their cup of water should be within  arm’s reach.

She added, “when feeding him, he may be looking  around or playing. So you must exercise a lot of patience. Initially, the baby may not want to take it but by singing for him or  doing other things he likes, he will take the food little by little.”

Certainly for some mothers, knowing t he amount of food to give is a challenge. The intervention by Lagos State Ministry of Health and Alive and Thrive project provided graduated plates that made teaching mothers on weaning foods very easy

”They gave us a graduated plate so that mothers can know-how much to give. It has been helpful. I have been longing  to buy it, mothers were asking for it,” said Mrs Margaret Giwa, the matron in charge at Soteria Hospital, Omole ,Ikeja, Lagos.

Mrs Giwa added, “We use the graduated plates to teach mother. A baby is supposed to take a particular amount at a certain age, if the baby is not, the growth will be impaired.”

Some mothers resort to serving babies canned cereals. But Mrs Giwa said home-cooked meals are the best. “I personally do not like all these cereals because you do not know how long it had been stored, our local balanced meal is natural and the best that any baby should take,” she declared.

“There was a case of a 10-month old that was force-fed with amala and ewedu, the baby got choked and died; so we emphasize that it must be in puree form. The food can be made pureed using a food blender.”

To start, “you might not use a spoon when trying to feed them because when they see a spoon, they may liken it to drugs. You can wash your hands and use it. So pretend as if you are putting it into your mouth then take it into their mouth, try and entice the baby to take  and eat it.”

Mrs Ireti Badejo, a community volunteer who has been involved in house-to-house campaign on appropriate infant and young children feeding in Lagos Mainland local government.

Mrs Badejo said explanations are always made to mothers that in starting complement feeds, they should realise that like it takes an adult some time to adjust to some things, it is the same with babies.

What is the kindest thing you have done or someone has done to you?

What is pap smear test?