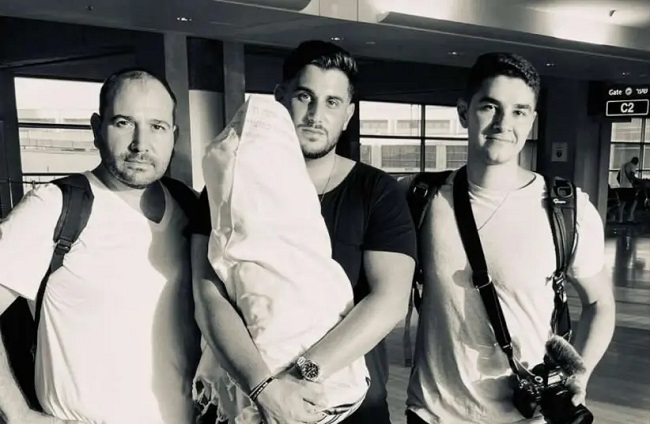 Three Israeli filmmakers in Nigeria were arrested last week while shooting a documentary, allegedly because they made contact with anti-government separatists. However, their families say they were doing nothing of the sort, The Jerusalem Post has reported.

They say the men were giving a Torah scroll to a small Jewish community in southern Nigeria — a gift as a token of thanks.

The Foreign Ministry later confirmed the arrests to The Jerusalem Post of Rudy Rochman, Andrew (Noam) Leibman and Edouard David Benaym, noting that all of them possessed dual citizenship with foreign countries, but said they could not confirm the reason for their arrest nor what they were being charged with. A joint statement released by the families later confirmed the arrests as well.

“We are not yet sure what they are accused of, but we are in touch with them and with their families and we are following up with the Nigerian authorities regarding this issue,” a Foreign Ministry spokesperson told the Post.

An Israeli diplomatic source said the Israelis were not involved in any separatist activities, but that separatists had posted photos of them making claims that drew the Nigerian authorities’ ire.

It is unclear if they will face charges and go to court.

The filmmakers arrived in Nigeria on July 6 to film We Were Never Lost, a documentary series about the mostly little-known African Jewish communities in Nigeria, Zimbabwe, Uganda and Ethiopia. It also focuses on China, India and Afghanistan.

Rochman, 27, the documentary’s host, is an Israel activist who was a leader of the organization Students Supporting Israel while in college at Columbia University. According to a statement by the families, the team has been working on the film for over a year.

The families noted that they are currently working with the embassies of the US, France and Israel to win their release.

The three had visited the Igbo community, meeting with Igbo King Eze Chukwuemeka Eri on July 7, which Rochman posted on his social media accounts.

According to a family statement, they gave a Torah scroll to the local communities they were documenting. Images of the gift-giving circulating via “non-state political groups,” added to the image a political weight it did not carry in reality.

In a statement posted Wednesday to Instagram, the documentary’s producer, Jonny Pottins, said the documentary is not meant to interfere in Nigerian politics.

“The filmmaking crew acts as a guest visiting the country and its various communities – there are no political overtones.”

We Were Never Lost is apolitical, and its only goal is to document the lives, customs and experiences of Jewish communities in these countries,” Pottins said.

The crew posted a similar statement to the documentary’s Facebook page on July 8. Several people commented on the post with messages supporting an independent Biafra.

“The most striking lesson to take home is that the aspiration of every Igbo Jew is to have a Judeo-Christian nation called Biafra,” one commenter with the name Biafra Boy wrote.

“If, the Igbo Jews need any resources at all, it is that you help in any way…  to achieve the Igbo Jews survival and the survival of the race, through the establishment of Biafra nation.”

The Igbo consider themselves Jewish, and one of the lost tribes of Israel, though this is not recognized by Israel nor the Chief Rabbinate, and they are not eligible for citizenship via the Law of Return should they not convert formally.

However, some of the Igbo people are in a state of conflict with Nigeria. This conflict dates back to a unilateral declaration of independence by the Igbo in 1967, something that ignited a violent 30-month civil war that saw over a million people killed. The conflict has never fully ended. In November 2020, Nigerian soldiersreportedly destroyed six Igbo synagogues.

This year, conflict resumed, with fighting between Nigeria and separatists in the Biafra region. One notable separatist leader, Nnamdi Kanu, a British-Nigerian national who identifies as Jewish, surfaced in Jerusalem three years ago,and a video emerged of him praying at the Western Wall, the BBC reported.

He was arrested in late June and appeared in court in Abuja, though exactly where he was arrested remains undisclosed. According to the families’ statement, the three embassies’ intervention has persuaded Nigeria’s Department of State Services, which detained the filmmakers, to allow the local Chabad to deliver kosher meals to them.

“We hope that the DSS will quickly conclude what the facts support – that the filmmaking team has no political motives and that the team should be released from custody as soon as possible,” the families’ statement said.

This is not the first time that Israelis traveling in Africa have spent time in prison under dubious circumstances. In 2010, the Tunisia-born Israeli artist Rafram Chaddad was arrested in Libya, where he said he had traveled to photograph abandoned synagogues and Jewish cemeteries. He spent nearly six months in prison on suspicion of being a spy.

The next year, Ilan Grapel, an Israeli-American law student, was arrested in Egypt for espionage a few months after the ouster of longtime president Hosni Mubarak. He was released to Israel in a prisoner exchange four months later.

On Thursday, Pottins projected optimism in an Instagram video message.

“There’s processes underway right now, and we’re hoping for some good news,” he said. “Keep the team in your thoughts and prayers.”