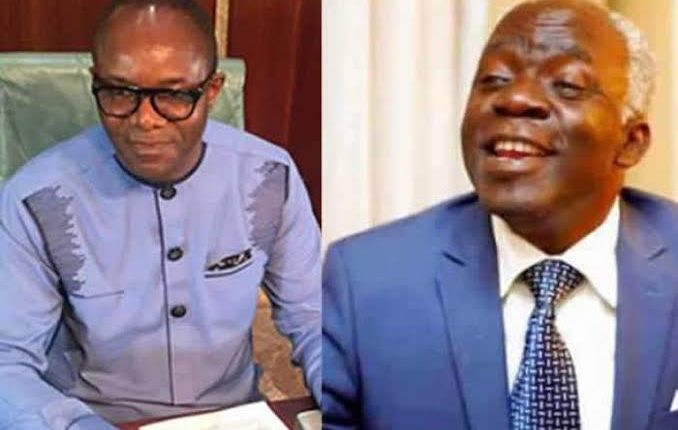 A Senior Advocate of Nigeria (SAN), and human rights activist, Mr Femi Falana, has written to the Minister of State for Petroleum Resources, Dr Ibe Kachikwu, asking him to provide him with information regarding the “loss of $60 billion oil revenue.”

Falana made the request in a letter dated April 10, 2019, he personally addressed to the minister.

In the letter, Falana said the Federal Government had refused to collect the said amount from International Oil Companies (IOCs) as of August 2017, adding that he had earlier informed Kachikwu about the loss of the revenue while he was the Group Managing Director of the Nigerian National Petroleum Corporation (NNPC) in 2015.

Then, he said Kachikwu had also confirmed the huge oil revenue loss which he said was blamed on “public officials,” while Falana also informed that the acting chairman of the Revenue Mobilisation Allocation and Fiscal Commission, Mr Shetima Bana, also made a confirmation in January 2019.

He, however, urged the minister to provide details on “how the nation lost $60 billion oil revenue from non-implementation of Production Sharing Contract (PSC) terms between the government and the IOCs.

Falana, had, in his letter, given Kachikwu a seven-day ultimatum to make the information available, in with the Freedom of Information Act, saying he would be forced to seek a court order should the minister failed to do so.

However, the Chief of Staff to the minister, Oge Modie, was said to have acknowledged the receipt of Falana’s request in another letter signed and dated April 11, 2019.

In my letter dated 5th November 2015, addressed to you in your capacity as the Group Managing Director of the Nigerian National Petroleum Corporation (NNPC), I called your attention to the refusal of the regulatory agencies in the Ministry of Petroleum Resources to enforce the Production Sharing Contracts signed with the International Oil Companies by the Federal government.

In a public statement credited to you sometime in August 2017, you did disclose to the media that Nigeria had lost not less than $60 Billion due to the refusal of some public officials to implement the terms of the Production Sharing Contracts between the Federal Government and the International Oil Companies.

In another public statement made on January 19, 2019 by the Acting Chairman of the Revenue, Mobilisation, Allocation and Fiscal Commission, MrShetima Bana, confirmed the loss of oil revenue of $60 billion arising from the non-implementation of the said production sharing contracts.

In view of the foregoing, I am compelled to request you to furnish me with information on the revenue of $60 billion which the Federal government has refused to collect from the International Oil Companies as at August 2017. As this request is made pursuant to section the provision of the Freedom of Information Act you are required to supply the requested information not later than 7 days from the date of the receipt of this letter.

TAKE NOTICE that if you fail or refuse to accede to my request, I shall be compelled to apply to the Federal High Court to direct you to avail me with the information on the loss of the oil revenue of $60 billion.

On behalf of the Honourable Minister of State for Petroleum Resources, Dr. Emmanuel Ibe Kachikwu, this is to acknowledge receipt of your letter dated 10th April 2019 and received 11th April 2019 on the above subject matter,” the letter read.

Please accept the assurances of the Honourable Minister’s best regards.

Falana to Buhari: No law, policy backs your family members’ use of presidential…

Afe Babalola asks Buhari to convoke SNC to save Nigeria