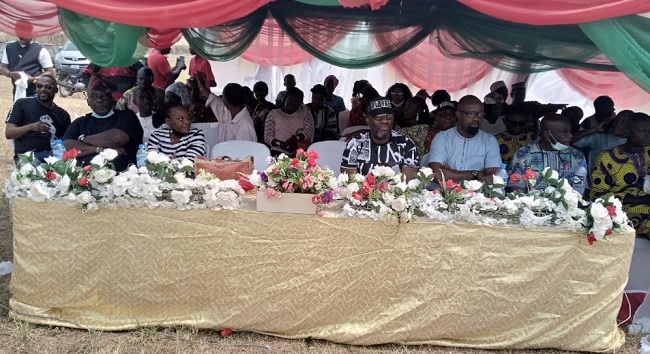 The founder of Hope Also Need Help Foundation, Abayomi Fagbenro, popularly now as Bibire, on Friday, in Ibadan, organised a Christmas funfair for children and their parents.

Fagbenro stated that he organised the event, in collaboration with his foundation, to donate and offer gifts to people and families who do not have the means to celebrate these festive periods. He added that they expected 3000 children at the event and that they had many gifts items for them and for their parents.

He said he started his foundation 12 years ago, and that the foundation provides humanitarian service to the underprivileged in Oyo State and in the whole South West.

He added that “any form or shape we can assist people that are underprivileged, we are doing our best in that regard.”

While speaking about his political ambition, he said in 2019 he contested for Ibadan South West and North West federal constituency election under the Young Democratic Party (YDP), adding that 2023 is far, but soon he will let people know where is going.

“I contested for Federal House of Representatives in 2019, why shouldn’t I try it again and see what God is about to do,” he said.

“Our governor (Seyi Makinde) is doing a marvellous job, but he needs help. That is why I decided to join PDP.”

Mobolaji Bamidele, while making a speech, described Fagbenro as a true philanthropist and a leader. He also asked the people to pray for Fagbenro.

“People get the type of leaders they deserve,” Bamidele said. “We should do the right thing. This is the time to change the narrative, to go with passion.”

Mr Muyiwa Fatokun, who is blind, spoke on behalf of disabled people. He said he has been hearing about Fagbenro for some time now and that he is happy with what Fagbenro is doing with the funfair and other humanitarian gestures he has been doing.

One of the volunteers of the foundation, Mrs Mary Akosile, said she was happy with the turnout of parents and children at the events, adding that they have a lot of gifts items to share for them, and also many games for them to play.

Some of the parents at the event who identified themselves as Mrs Owolabi, Mrs Akinade, and Mr Akin Alabi expressed joy for with Fagbenro has done for them and for their children this Christmas season.

In the course of the event, the children were engaged with games such as Santa, elf, bouncing castle, trampoline, etc. They were also given gifts by Father Christmas.

Cleric harps on need for Christians to plant before harvesting