FACT CHECK: What did the Health Minister say regarding maternal mortality and breastfeeding? 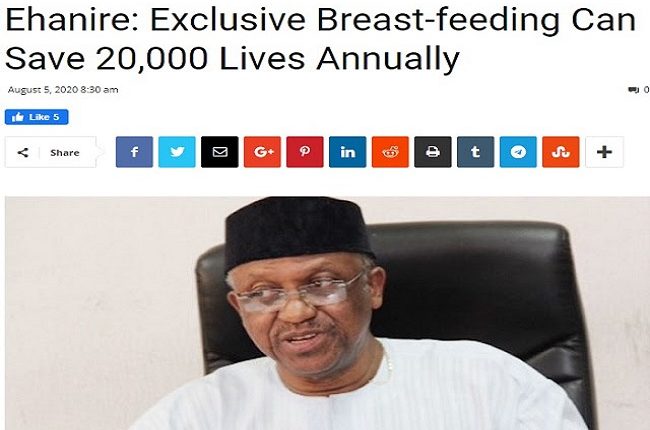 FULL STORY: Nigeria’s Minister of Health, Dr Osagie Ehanire on Wednesday, August 4, 2020, attended an event held to commemorate the 2020 World Breastfeeding Day in Abuja. The event was jointly organised by Civil Society-Scaling Up Nutrition in Nigeria, Alive and Thrive, UNICEF, Nutrition International, Breakthrough Action, Action Against Hunger, HKI and Save the Children.

During the event, Dr Ehanire who extolled the benefits of breastfeeding said that breastfeeding benefits mothers by helping to prevent postpartum bleeding, to support child spacing, and to lower the risk of cancers and early return to pre-pregnancy body weight.

Ehanire further said that about 20,000 maternal deaths could be prevented annually if mothers practice optimal breastfeeding.

VERIFICATION: Owing to differences in newspapers’ reports, Dubawa contacted the minister for clarifications. In the full statement delivered at the event which was made available to Dubawa, the minister who cited a Lancet publication by the World Health Organisation (WHO) was quoted as saying that, “an estimated 20,000 maternal deaths could be prevented annually if optimal breastfeeding were practised.”

Ehanire added that: “According to the National Demographic and Health Survey 2018, 97% of children are breastfed at one point or the other; but only 42% is put to the breast within 1 hour of birth and the proportion of children 0 to 6 months who are exclusively breastfed are a mere 29%. The World Health Organization (WHO), in a series of Lancet publications on breastfeeding, reports that scaling up breastfeeding practices to almost universal level could prevent an estimated 823 000 annual deaths or 13.8% of all deaths of children younger than 24 months.”

Different versions of the minister’s claim on 20,000 deaths were reported by the media including The Guardian, The Punch, ThisDay, Today NG and others.

While the above quotes attributed to the minister were rightly reported by Guardian, some other dailies including ThisDay and TodayNG offered slightly-different interpretations in their separate reports.

ThisDay reported that the minister said, “the lives of an estimated 20,000 children would be saved if nursing mothers would strictly observe six-month exclusive breastfeeding.”

This figure is far from that reported by This Day who attributed the claim to the minister. Going by the statement delivered at the event and the press release issued by the ministry afterwards, it is also clear that the minister didn’t state that an estimated 20,000 children would be saved if mothers practice exclusive breastfeeding.

Today NG claimed the minister said “an estimated 20,000 women die every year in Nigeria due largely to poor breastfeeding.”

There is no available public record to confirm that 20,000 women die in Nigeria due to poor breastfeeding. The minister of health also did not make this claim at the event as reported by the media.

The 20,000 deaths from poor breastfeeding represent the records across the globe and not just to Nigeria.

In the first of its breastfeeding series, The Lancet holds that the scaling up of breastfeeding can prevent an estimated 823,000 child deaths and 20,000 breast cancer deaths every year.

A subheading “Estimating Lives Saved for Children and Mothers” on page 485 exclusively explains that: “The Lives Saved Tool estimates that 823,000 annual deaths would be saved in 75 high-mortality LMICs (lower-middle-income countries) in 2015 if breastfeeding was scaled up to near-universal levels. This corresponds to 13.8% of the deaths of children under 2 years of age. For preventable deaths, 87% would have occurred in infants younger than 6 months due to a combination of high death rates and low prevalence of exclusive breastfeeding.

In the conclusion in its first breastfeeding series, Lancet noted: “As an example of the potential to save women’s lives, we estimated that present rates of breastfeeding prevent almost 20,000 annual deaths from breast cancer, and an additional 20,000 are preventable by scaling up breastfeeding practices.”

This claim was corroborated by the WHO and the United Nations Children’s Fund (UNICEF) July 2017 joint report on breastfeeding titled Nurturing the Health and Wealth of Nations: The Investment Case for Breastfeeding which holds that: “The global cost of inaction on breastfeeding is steep. As noted above, it is estimated that over 820,000 children under age five and 20,000 women each year die as a result of not breastfeeding and suboptimal breastfeeding practices.”

Based on an assessment of the original statement of Nigeria’s Minister of Health, Dr Ehanire, and additional information on the significance of breastfeeding in the research by Lancet, it is evident that two newspapers, ThisDay and TodayNG misrepresented the minister’s comment on breastfeeding in relation to Nigeria. It is, however, true that optimal breastfeeding could prevent 20,000 maternal deaths annually across the globe.

The researcher produced this fact-check per the Dubawa 2020 Fellowship partnership with The Nigerian Tribune to facilitate the ethos of “truth” in journalism and enhance media literacy in the country.