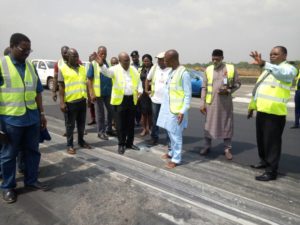 THE repair of the Akanu Ibiam International Airport, Enugu, the runway has been completed, the Federal Airports Authority of Nigeria (FAAN) said in Lagos on Monday.

She said FAAN’s team of engineers led by the Managing Director, Mr Saleh Dunoma, inspected the project and certified it as meeting the required standards.

Yakubu apologised to travellers and other stakeholders for the inconveniences caused by the partial closure of the runway to pave way for its rehabilitation.

During the period, the airport was open for operation only between 7.00 a.m. and 3.00 p.m. to enable the contractor to use the working hours to do the job to ensure a “stable and even surface” of the runway.

The project was, however, delayed for a few days before the runway was finally opened for full flight operations.

Trader docked over alleged theft of items worth N59,300