Exposure to traffic exhaust may cause stroke 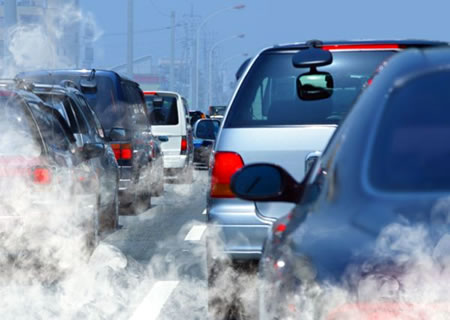 Even in environments with low air pollution, long term exposure to traffic exhaust near people’s homes may heighten their risk of stroke, according to a new study from Sweden. The culprit appears to be a fine particle air pollutant called black carbon.

Even in environments with low air pollution, long term exposure to traffic exhaust near people’s homes may heighten their risk of stroke, according to a new study from Sweden. The culprit appears to be a fine particle air pollutant called black carbon.

Exposure to exhaust fumes may raise the risk of stroke, new research suggests.

Demolishing the centre won’t go down well with us —Sanni, Oyo Muslim…

The researchers came to this conclusion after investigating links between exposure to different types of particulate matter and rates of heart disease and stroke in three cities in Sweden.

They report their findings in a recent Environmental Health Perspectives study paper.

The authors write that they observed “few consistent associations” between heart disease and stroke and different types of particulate matter and their sources.

“However,” they conclude that “long term residential exposure to locally emitted [black carbon] from traffic exhaust was associated with stroke incidence.”

Dr. Petter L. S. Ljungman is first author of the study paper and an associate professor at the Institute of Environmental Medicine at Karolinska Institutet in Stockholm, Sweden.

“This study,” he says, “identifies local traffic exhaust as a risk factor for stroke, a common disease with great human suffering, high mortality and significant costs to society.”

Black carbon is a sooty material that comes from burning fossil fuels. According to the United States Environmental Protection Agency (EPA), it is a significant component of fine particle air pollution.

Vehicle and other engines that run on gas and diesel and power plants that run on coal and other fossil fuels emit black carbon along with other particulate matter.

Road traffic is the primary source of black carbon emissions in cities.

Dr. Ljungman and colleagues from Karolinska Institutet and other research centers in Sweden used data on 114,758 people who were participants in other studies that had collected information about cardiovascular risk factors from examinations and questionnaires.

The participants, who lived in three cities in Sweden, were healthy and middle-aged at recruitment. The study period started in 1990 and lasted for around 20 years. The dataset included the history of the participants’ residential addresses over the period.

Over the 20 years of follow-up, 5,166 individuals developed ischemic heart disease, and 3,119 experienced strokes.

Using emissions databases and dispersion models, the team estimated how much each type of emission source contributed to particulate matter, including black carbon, at specific residential addresses.

The analysis revealed that the risk of stroke went up by 4% for every additional 0.3 micrograms per cubic meter (μg/m3) of black carbon air pollutant from traffic exhaust.

The researchers found no link to stroke for black carbon emissions from residential heating.

Also, they observed no links between total levels of PM10 and PM2.5 particulate matter and either heart disease or stroke.

“There was some evidence,” note the authors, “of an association between PM2.5 specifically from local emissions of residential heating and incidence of [ischemic heart disease] that warrant further investigation.”

In their study background, the authors refer to research that has linked long term exposure to PM2.5 particles and atherosclerosis, the clogged artery condition that raises the risk of heart disease and stroke.

The residential areas that the new study covered were in the cities of Gothenburg, Stockholm, and Umeå. The annual averages during the study period for PM2.5 particulate matter in these cities ranged from 5.8 to 9.2 μg/m3. This range is below the 25 μg/m3 threshold in current EU standards.

Although the EU mention black carbon as a component of PM2.5 particulate air pollution, they have no specific threshold for black carbon.

“Black carbon from traffic exhaust could be an important measure to consider when assessing air quality and health consequences.”

What connects depression, anxiety, and PTSD?

Does having sex on our minds make us more likely to lie?