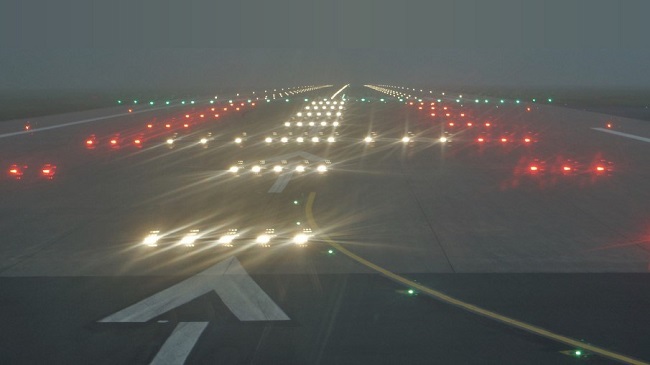 CONTROVERSY has continued to trail the recent incident involving Nigeria’s Azman airline’s Boeing 737-500 aircraft which suffered a burst tyre on the runway 18right /36left at the Murtala Muhammed International airport with experts condemning the non installation of the required Air Field Lighting (AFL) at the runway at the local airport.

It is no longer news that the Runway right at the local airport which was meant particularly for local flights has been missing for over one decade a situation which has hindered the optimal performance of the local carriers once it’s after 6:00 pm.

The lack of airfield lighting on the local runway has continued to be a minus for the local airlines as they have to waste time and resources once their flights fall under 6pm as they have to make use of the runway at the international airport which is more busy at the time because most international flights operate in the evenings,

The incident involving Azman airline which had its tyre burst while using the international runway, attracted criticisms from experts across the sector with many asking questions about the seriousness of the aviation authorities towards safety components like airfield lighting.

Many of the experts premised their grievance on the disruption to international flights when the Azman issue came up leading to the delay in foreign flights as the runway had to be shut down while the Azman plane had to be evacuated from the international runway.

The runway at the local wing of the airport suffered professional negligence when it was billed for rehabilitation under Mr Babatunde Omotoba as the then minister in 2008 as the upgrade was done without remembering the need to add the include the re installation of a new airfield lighting in the project.

Thirteen years after, despite the continuous cries on the need to instal an airfield lighting at the local runway at the Lagos airport, the Federal Airports Authority of Nigeria has failed to do it with both local and international flights over flogging the runway at the international airport.

Various experts who spoke through most of the professional platforms have attributed the non input of the cost of the installation of another airfield lighting in the execution of the local airport runway in 2008 as negligent.

The contract for the expansion and resurfacing of the local airport runway was awarded to P.W Nigeria Limited at a whopping N3.56 billion but was discovered that the cost of airfield lighting was not included in such a huge project.

For thirteen years now, as the aviation authorities continue to handle all the important airfield lighting system at the airport with levity, the various professionals are asking how the authorities intend to handle a more complex situation than that of Azman that may warrant an aircraft in incident to remain on the international runway longer than expected.

How Nigerian travellers must leverage on new UK travel guidelines