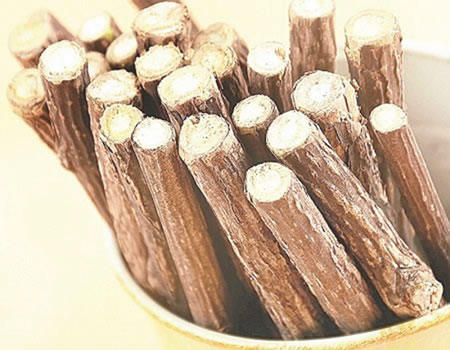 THE use of chewing sticks can be a cost-effective and efficient means of preventing tooth decay. Now, in a new study, experts say that Zanthoxylum zanthoxyloides may be the best option because of its high salivary fluoride retention.

In a new study, researchers said the high fluoride retention in the saliva makes Zanthoxylum zanthoxyloides a cost-effective and efficient means of preventing tooth decay if used properly at regular interval.

Zanthoxylum zanthoxyloides is a local chewing stick known in Yoruba as Orin Ata.

For the study, the researchers determined and compared the salivary fluoride retention after the use of different fluoride-containing chewing sticks and a non-herbal fluoridated toothpaste.

Fluoride in toothpaste has contributed immensely to the prevention of tooth decay worldwide.

The 2019 study in the Journal of Contemporary Dental Practice involved Emeke U, Obontu T.J, Olushola I, and Akinyele A at the Faculty of Dentistry, College of Medicine, University of Ibadan.

Four commonly used chewing sticks and one non-herbal fluoridated toothpaste were each used at two days interval, and saliva samples were collected at 0, 10, 30, 45 and 60 minutes after each use.

These samples were stored and transported in special coolers to the laboratory, where they were analyzed for fluoride concentration using a spectrophotometer at the wavelength of 620 nm.

Previously, Professor Juliana Taiwo, at the 2016/2017 inaugural lecture of the University of Ibadan, entitled “Nature, Disease and Oral Health: The Conspiracy Triad of the Ageing Dentition”, said Zanthoxylum zanthoxyloides contains enough fluoride and within a safe limit to prevent tooth decay.

According to her, a study that investigated the fluoride content of 10 commonly used chewing sticks in Nigeria found that Zanthoxylum zanthoxyloides contained the highest amount of fluoride, a little more than even the affordable fluoride toothpaste.

Professor Taiwo said the natural fluoride in Zanthoxylum zanthoxyloides was retained in the saliva longer than that in non-herbal fluoride toothpaste.

She, nevertheless, said since the chewing stick is being used to clean the teeth, its tuft must be ensured to clean all surfaces of the teeth and the tongue.

“At the community, we found about 70 per cent of those elderly using chewing stick were actually just chewing it and not using its tuft to brush their teeth and tongue. So, they end up having a lot of plaque and calculus.”

The 2016 study titled “A Study of the Anticaries Activity of Three Common Chewing Sticks and Two Brands of Toothpaste in South West Nigeria” was published in British Journal of Pharmaceutical Research.

The results showed that the ethanol extracts of Zanthoxylum zanthoxyloides showed the highest tooth decay preventive effect followed by Vernonia amygdalina and then Massularia acuminata.

Also, both brands of toothpaste were inferior to the ethanol extracts of all the chewing sticks in the anti-caries activity. This is not unexpected since chemical kinds of toothpaste owe their antimicrobial property to the presence of fluorides as part of their ingredients.

Until now, some of these chewing sticks have been shown to possess varying degrees of antimicrobial activity against oral microbial flora which indicates, therefore, that the chewing sticks, in addition to providing mechanical stimulation of the gums, also destroy microbes.