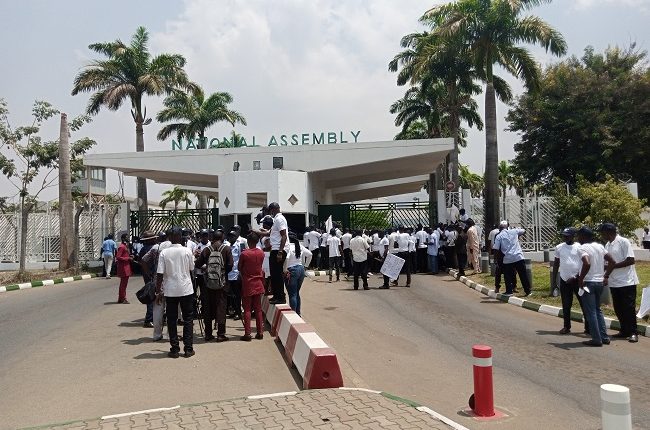 Parliamentary Staff Association of Nigeria (PASAN) has issued a six days ultimatum to the National Assembly and the 36 state assemblies to either implement the two-year-old Executive Order 10 or face a total shutdown of the legislative arm of government across all tiers of governments.

The main entrance to the national assembly complex was, on Tuesday, sealed off for over an hour by members of the Parliamentary Staff Association of Nigeria (PASAN) as they protested the non-implementation of financial autonomy to state assemblies.

Members of the association from the 36 states of the federation assembled at the National assembly complex to register their grievances over the non-implementation of the executive order that robs the state legislatures of their financial autonomy.

Usman said in the last two years since Executive Order 10 was signed into kay by the President, PASAN as a critical stakeholder in the Legislative arm of government wrote the governors Forum, the Speakers of the 36 states and the office of the Auditor General of the Federation to implement the document but all correspondences had yet been responded to.

This was followed by the issuance of 21days ultimatum without any response; then the 14 days ultimatum, all in line with the labour Act fell on deaf ears until it’s expiration and the current six days ultimatum.

Executive Order 10 (1a) says: “Without prejudice to any other applicable laws, legislations and conventions at the state tier of Government, which also provides for financial autonomy of State Legislature and State Judiciary, allocation of appropriated funds to the State Legislature and State Judiciary in the State appropriation laws in the annual budget of the state, shall be a charge upon the Consolidated Revenue Fund of the state, as a First Line Charge.”

This, PASAN said has been flaunted in the last two years, leaving the state assemblies at the mercy of the governors.

The association also threatens a nationwide shutdown of legislative houses, the national assembly inclusive, in the next six days, if the government fails to honour her demands.

The protesters say they will carry out the same protest at the office of the Auditor-General which is part of the implementation agency to register their grievances.

The British Parliament at the Westminster Hall held a debate on ‘e-petition 554150, relating to Nigeria and the sanctions regime’ on Monday. The government of the United Kingdom has however responded…Executive order 10