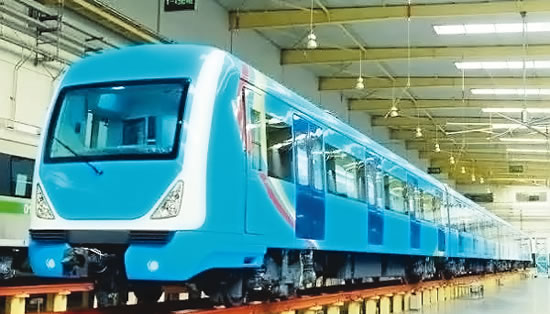 The Lagos State government is set to commence the operation of its Red and Blue line trains from the first quarter of 2023. In this report, BOLA BADMUS, TOLA ADENUBI and LEKAN OLABULO write on the prospect of the project against the backdrop of the fate that befell other similar forms of public transportation in the state.

THE Red and Blue rail lines are two ambitious mass transit projects being undertaken by the Governor Babajide Sanwo-Olu administration in Lagos State. The trains are expected to commence operation by the first quarter of 2023.

With the laying of the final T-Beam, all difficult civil works standing in the way of the Lagos Blue rail line, which started in 2012, have been overcome. The contractors, China Civil Engineering Construction Corporation (CCECC), have since gone ahead to set the rail tracks along the alignment and move the project to completion.

Speaking at the launch of the last T-Beam on the Blue Line, Governor Sanwo-Olu said the achievement signposted his administration’s commitment to bringing succour to Lagosians and give them choices in mass transportation.

The governor said the rail projects represented the audacity of his administration’s vision to deliver a robust integrated transit system as encapsulated in the traffic management and transportation pillar of his government’s T.H.E.M.E.S. development agenda.

He said the two sets of EMU coaches already procured for the Blue Line operations would arrive in Lagos from China before the end of October. He said the rail line would be test-run immediately after completion while passenger movement would start within the first quarter of 2023.

While many Lagosians have expressed excitement about the commencement of the two rail projects, for others, the state’s maintenance culture has to be improved upon if the rail projects are to outlive the current administration.

Speaking with Saturday Tribune, a Lagos-based lawyer, Mr Olaniyi Fajemirokun, wondered how the state government intends to maintain the two rail projects if it is struggling to maintain the BRT buses launched just last year.

Fajemirokun said: “The Red and Blue rail projects are really ambitious and commendable. I congratulate the Lagos State governor on this. The man has shown that he feels the pain that most people go through during rush hour on Lagos roads.

“However, I must raise the issue of maintenance culture here. The Lagos State government has a very poor history of maintenance. You can take a look at the state of all the 500 BRT buses procured just a year ago. Many are in deplorable state. The cooling systems of the BRT buses are already damaged. To enter some of the buses, passengers have to tap in from another bus because their payment system is faulty.

“If you go to the Abule-Egba station of the BRT, you will see many of those buses parked by a building that was formerly occupied by the National Union of Road Transport Workers (NURTW). All those parked buses are said to be faulty. Because the buses belong to the government and are given out as part of a franchise arrangement, the drivers or operators of the buses drive them recklessly.

“The idea behind the BRT scheme was for Lagosians to leave their cars at home and make use of a comfortable public bus ride to their workplaces. That idea has been defeated because transportation on BRT buses is no longer comfortable and cozy. People no longer sit comfortably because the huge numbers of passengers standing sometimes causes discomfort for those sitting. Sometimes even when the cooling systems are not working, the buses get overloaded, leaving many passengers stressed out before getting to their workplaces.

“To imagine that these are buses that came in around May 2021, it shows that the maintenance culture in this part of the world is abysmal.

“Is this how the Lagos State government intends to maintain the Red and Blue rail projects? If the state fails to improve on its maintenance culture, I don’t see the projects outliving the present administration.”

Also speaking with Saturday Tribune, a civil servant with the Nigerian Shippers Council (NSC) wondered why many buses bought with taxpayers’ money always end up poorly maintained. The civil servant who wouldn’t want his name in print said: “The first set of BRT buses that arrived in Lagos were the red buses. When they came, they were cynosure of all eyes. Where are they today? They have become relics of what the BRT idea was meant to be.

“When the red buses seemed like disgrace to the state government, the blue ones currently being used where brought in. When they too arrived, it was like enjoying transportation in London. Their cooling systems were out of this world.

“Back then, I would leave my car just to enjoy a cozy ride on these BRT buses. Today, what do we have? The blue buses are fast toeing the path of the red buses. Many of them are in a bad shape while the few that are working are struggling to maintain the original standard.

“The drivers are not helping matters. They overload the buses and at the end of the day, many of them run out of shape. Is this how the state intends to maintain the Red and Blue trains?

“The recruitment pattern of Lagos State for public transportation needs to be overhauled. Many of the drivers manning the BRT buses are rude and aggressive. The state needs to employ better hands for the trains or they will be poorly managed. The idea that it is a public asset allows these drivers to man the BRT recklessly. I just hope that this doesn’t repeat itself on the trains when they commence operations.”

For some residents of Agege, Iju and Agbado, the Red rail line is expected to crash transport cost by almost 50 per cent. Speaking with Saturday Tribune, some of the residents lamented the huge cost of transportation from Agbado and Agege to Ikeja and the Lagos Island axis.

“But if the Red rail commences operations, it won’t cost more than N1,000 to and fro. Also, the delays occasioned by gridlocks will be out of the question. The Red rail will really improve transportation to and fro the Lagos Island and the Agbado axis. The waste of long hours in hectic rush-hour traffic will be removed.”

For residents of Orile and Mile 2, the Blue rail line is a relief. A trader, Alhaja Abibatu Tanimola, who plies her trade in the Marina area, expressed the hope that the Blue line would remove the traffic snarl experienced while traversing the Marina-Mile 2 axis.

Alhaja Tanimola said: “Road transportation from Mile 2 to Marina is always hectic, particularly during the evening rush hours. Once the Blue rail commences operations, as promised by Mr Governor, in the first quarter of 2023, all that is expected to be gone. I stay in Alakija area and hope it is extended to Okokomaiko after the first phase is completed.

“The Blue rail line will really come as a relief to Lagosians if it commences operations as promised by Mr Governor. The perennial traffic snarl around the Orile axis will be out of the question. We just hope that the project will commence as assured by Mr Governor. It will really be a relief for some of us that have to be on the island every day for business.”

In the meantime, some commercial bus drivers have expressed confidence that the trains would not affect or threaten their operations. This is even as the bus operators added that the state needs more commercial buses for residents and workers in the state.

A driver who identified himself simply as Awuru, in an interview with Saturday Tribune, said: “The trains cannot in anyway affect our operations. Already, there are not enough commercial buses in Lagos.

“Again, there are routes and timing for train operations. This is unlike commercial buses that you can join at your convenience and time. Trains move at designated time and many will still come back to the buses due to issues around timing.

“The only thing that can threaten commercial vehicle operations is when the government buy buses in large quantities and distribute to people in different parts of the state. Train has limited locations, so it cannot threaten our operations.”

Another driver who identified himself simply as Murtala also said: “There have always been trains in Lagos and people still patronise commercial buses almost on a daily basis. These new trains will not change anything.

“The population of Lagos is too large to rely solely on rail transportation. The government bought many buses in the past and their operation did not threaten our operation. The new trains cannot really affect our operations too.

“Imagine the number of people that go out very early every day between Lagos and Ogun states. How many trains can convey all of them and will the trains be available between 5.00 a.m. and 9.00 p.m. every day?”

How is high inflation, steady decline in naira value affecting your business, livelihood?

Kidnappers disguise as madmen to abduct our children —Lagos community