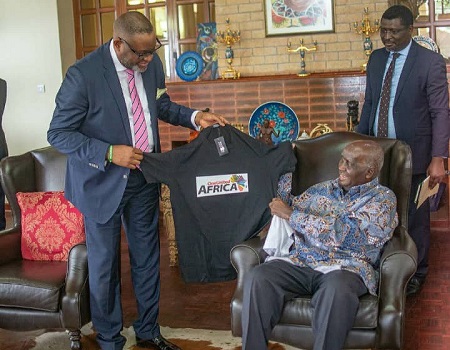 The first president of the Republic of Zambia, Dr Kenneth Kaunda, has expressed optimism that the dream to build a strong, united and prosperous Africa can still become a reality, with younger elements taking over the mantle of leadership in the continent.

The foremost nonagenarian pan-Africanist expressed the optimism when he received in his residence at Lusaka, the capital of Zambia, the convener of #ONEUNITEDAFRICA, a group advocating for African unity, Honourable Bimbo Daramola and his team.

This was contained in a statement issued by the Director of Public Communications, #ONEUNITEDAFRICA, Lanre Aribisala and made available to Tribune Online, on Sunday.

Endorsing the crusade, aimed at the unification of the African Continent and its seven-pronged paradigm, the former Zambia leader relived his evergreen quote, saying “…there was and still is a real hope for the Continent with the young people at the helm to succeed in the Pan-African dream if they (the young people) continue in their quest to build Africa.”

Kaunda, who will be 96 years old on April 24, led the Republic of Zambia to independence from the United Kingdom in 1964 and he was one of the persons who attended the conference held on 19 September 1954 where the late Ghanaian President, Dr Kwame Nkrumah, charged all present to lead the struggle for the independence of their respective African states.

He said he was overwhelmed that there is a young man driving the huge vision; one who has taken up the challenge that he (Kaunda) posed when he asked and hoped for the enlistment of an assemblage of new, young men visionaries to build Africa and keep motherland afloat through the pan-African vision.

Kaunda was said to have shown effusive emotions, upon the presentation of the #ONEUNITEDAFRICA vision that put forward the renaissance of the pan-Africanism ideals as the vehicle for Africa’s peace, unity and prosperity.

The former president, who one of the vestiges and champions of Pan Africanism alongside the likes of the late Nkrumah, said for the team to pick up the vision with the demonstrated passion for the restoration of Africa’s essence, values, ideas and ideals, “this is a very inspiring and humbling experience for me.”

Revered and referred to as the Ghandi of Africa, the freedom fighter, Kenneth Kaunda, was imprisoned twice for struggles that started in 1949 to secure the independence of his country and liberation of the African people and became the country’s president on 24 October 1964.

He led the pan-African movement alongside other African patriarchs, most of who later led their countries to independence, including Chief Obafemi Awolowo of Nigeria, Kwame Nkrumah of Ghana, Jomo Kenyatta of Kenya, Mwalimu Julius Nyerere of Tanzania and Dr Hastings Banda of Malawi.

The blessings by former President Kaunda has increased the roll of high-profiled endorsements for the #ONEUNITEDAFRICA crusade which had received endorsements from two former Nigerian presidents, Chief Olusegun Obasanjo and Dr Goodluck Jonathan and former Secretary-General of the Commonwealth, Chief Emeka Anyaoku, among others.