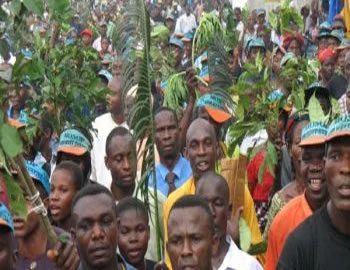 Ex-militants from the coastal area of Ondo State appealed to the state government to not make them regret surrendering their arms and ammunitions to the Federal Government, following their alleged exclusion from the Presidential Amnesty Programme.

This plea was made by the over 6000 militants from Ilaje and Ese – Odo Local Government Areas of the state during their visit to the headquarters of Ondo State Oil Producing Areas Development Commission (OSOPADEC) in Akure, the state capital.

Speaking on behalf of the ex-militants, their spokesperson General Job Omotua, lamented that they were lured into submitting their arms but were later abandoned by the state and federal government.

According to Omotua, ”we have been abandoned and neglected by the government at various levels in its Presidential Amnesty Programme till date having been so disarmed for reintegration.

“We the Youths and Ex-Militants of the mandate areas in Ondo State which comprises of Ilaje and Ese-Odo Local Government Areas of Ondo State being part of the Federal Government initiative of disarmament/amnesty to ensuring absolute peace and security in the Niger Delta Region of Nigeria.

“We, in compliance, accepted the offer, terms, and conditions of the Federal Government by embarking on or keying into the disarmament/presidential amnesty exercise of Ex-Militants in November 2017 and have accordingly surrendered or handed down to the Government arms and ammunitions of various degrees.”

He said, “granting us our few requests will not make our members regret ever submitting their ammunition for peace to reign and our members will not go back to the creeks.

“We are not troublesome youth but committed members of the society who have paid their dues but are left to face hunger.

The former militants, however, expressed confidence in the leadership of the OSOPADEC in assisting in tabling their grievances before the state and federal government to address their demands without usual delay.

“We believe that with the development at the OSOPADEC, various bottlenecks that had hindered them from getting government’s attention will no longer be experienced.

“Having engaged this commission (OSOPADEC) close to four years and our encounters with characters that form this commission, your ways of addressing and encouraging us on the genuine intention of government towards our requests and appeals is quite appreciated.

“As the person assigned to manage this commission, for now, we are pleased to say that you are a familiar terrain through whom our long agitations can be achieved without delay due to your endowed wisdom and ways of doing things.

“We are confident that there are no obstacles before you to drive home our request to the government especially when working with the present Deputy Governor Hon Lucky Ayedatiwa (Acting Governor).

“His person and principles are well designed, evident enough for people to read as a genuine personality that is committed to the welfare of his people without any bias. He is the best man for the job that will not take what belongs to the helpless to enrich himself.

Please be kind enough to relate with him freely on our matters.”

Responding, Dr Victor Koledoye denied that the present administration in the state has abandoned them after they yielded to the Federal government’s directive to hand over arms and ammunitions.

Koledoye assured them that the state government would soon put smiles on their faces and pleaded with them not to return to the creeks.

The Acting Chairman who said they would not regret their action pleaded with them to be patient with the state government.