Latest NewsTop News
By Shola Adekola-Lagos Lagos On May 8, 2020 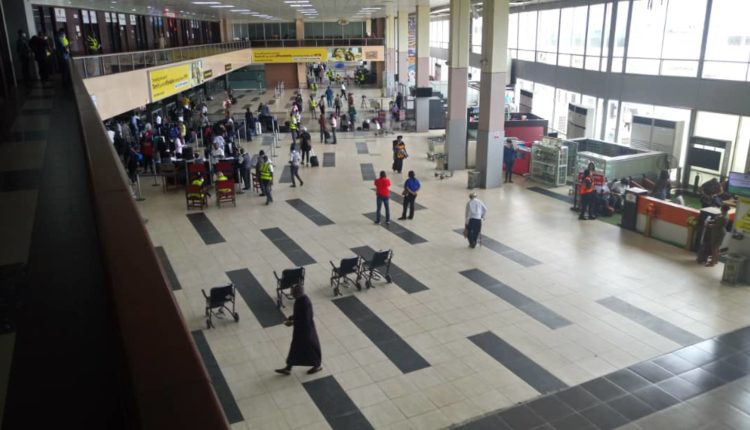 The 253 Nigerians who were flown into Nigeria from the United Kingdom through the Murtala Mohammed Airport, Lagos, were neglected for hours by the Federal Government on Friday.

For over six hours, they were left under the sun at the tarmac, waiting for the aircraft that was expected be dispatched by the foreign affairs ministry to convene them to Abuja, where they would be quarantined for 14 days.

The stranded returnees included the aged, children, toddlers and few others on wheelchairs. They lamented their neglect by the Foreign Affairs Ministry which they said did not send any official to the airport to receive them.

Although the British Airways aircraft that brought them landed at the Lagos airport around 2.45pm, they were left unattended to for six hours. Around 4.30pm, airport authorities took pity on them by serving them bottled water under the sun.

Though the plight of the returnees had been attributed to untidy arrangements made by the ministry of foreign affairs, eminent people among the returnees including a one time former Lagos State Deputy Governor, Abiodun Ogunleye, made spirited attempts to contact the minister on phone, but to no avail.

The returnees who out of agitation as at 5pm protested their neglect even as they threatened to leave the airport by force while some said they might reject the move to take them to Abuja.

According to Ogunleye: “We were not treated badly in UK. Why should we be subjected to ridicule in Nigeria? They just dropped us here at the airport and they said we cannot move. No government official to talk to us.

“We have very eminent people here; who are we to talk to now? They said the minister was to make arrangement for us. This arrangement is not tidy. We deserve to be well treated in our country”

A journalist, who was among the returnees, said Nigerians returned home only to be exposed to ridicule in their country, saying: “The aircraft that brought us has even loaded to go back to the United Kingdom. We arrived around 1.45pm. It is now 5pm. No official came to us to receive us and give us further directive.

“It is pathetic. Old men are here. They don’t have strength. Toddlers are here. Children are here. Some people are even on wheelchairs. They said Air Peace will take us to Abuja. We are stranded now. When we left UK, they said we were going to Lagos. Now, they said we are going to Abuja. No information. No directive. No word from the ministry.”

Stakeholders task media on domestication of VAPP bill in Bauchi