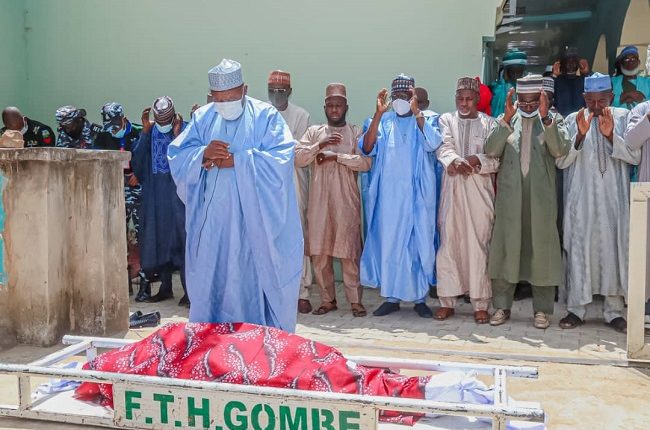 Few weeks after he was relieved of his appointment, the Former Health Commissioner in Gombe State, Dr Mohammed Gana, has lost his Mother.

The former Commissioner’s mother, Hajiya Hafsatu, died on Sunday in Gombe at the age of 80 years and was buried on Monday with the Governor, Muhammadu Inuwa Yahaya, in attendance at the Funeral Prayer.

Muhammadu Inuwa Yahaya thereafter commiserated with the former Commissioner of Health over the passing on of his mother.

The Governor who led top government officials to attend the funeral prayer for the late octogenarian which took place at the Federal Teaching Hospital, Gombe, described the demise of Hajiya Hafsatu as deeply painful.

He consoled Dr Ahmad Gana, his siblings and the entire members of the bereaved family urging them to take solace in the fact that their late matriarch lived an exemplary life characterised by devotion to Almighty Allah and left behind a good legacy for her children.

He prayed Almighty Allah to give her family the fortitude to bear the great loss and grant the deceased Aljannat Firdaus.

On the Governor’s entourage were the Chief of Staff, Alhaji Abubakar Inuwa Kari, Commissioners, Special Advisers, PPS and other government functionaries as contained in a statement by Ismaila Uba Misilli, Director-General (Press Affairs) Government House.

At about 25 minutes, the train slowed down at the uncompleted Omi-Adio terminal, a village on the Abeokuta/Ibadan expressway; it’s a stone throw from Apata in Ibadan. Conveyance of passengers from there and other terminals has not kickstarted as the terminals are still under construction and workers were found there…Ex-Gombe commissioner loses mother few weeks after sack