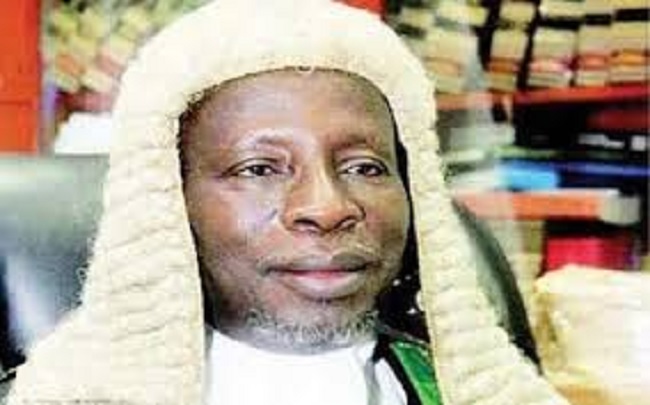 The immediate past Chief Judge of the Federal High Court, Justice Adamu Abdu Kafarati is dead.

A statement made available to newsmen in Abuja, on Friday, by the Chief Information Officer of the Court, Catherine Oby Nwandu said, “With great sadness, the Chief Judge of the Federal High Court of Nigeria, Justice John Tsoho, regrets to announce the sudden death of the former Chief Judge of the court, Justice Adamu Abdu Kafarati who passed on last night at about 7:30 pm being February 25th, 2021, after his usual evening Magrib Prayer in Abuja.”

The statement said the late Chief Judge, who was also a former Attorney- General of Bauchi State died of cardiac arrest.

The statement said, “The Chief Judge of the Federal High Court of Nigeria, Judges of the court, the entire Management and staff of the court commiserate with the family of the deceased.”

Justice Tsoho described the late Chief Judge as calm and gentle, but very courageous; extremely humble and forthright in all his dealings.

“The pain of the exit of Late Justice Adamu Abdu Kafarati will be felt by the court and as well as the country at large.” He added and prayed that the Almighty God will grant his immediate family, relatives and friends the fortitude to bear the irreparable loss.

The burial of late Justice Kafarati was done according to Islamic rites, on Friday, afternoon at the National Cemetery Gudu, Abuja.

The last time Nigeria recorded such a low figure was in the December 27 to January 2 week, when it reported 5,681 cases… Abdu-Kafarati is dead