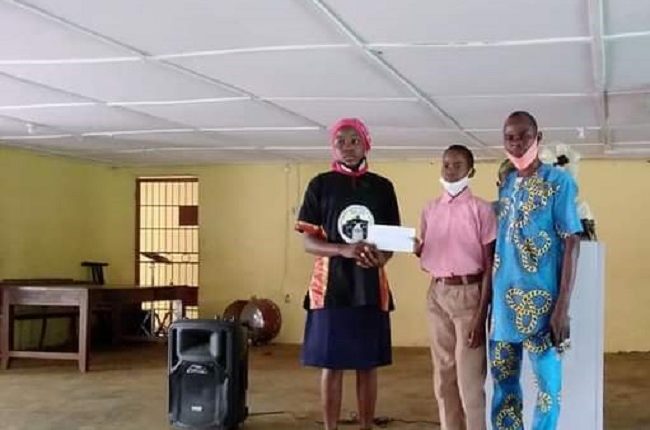 A 15-year-old student of Olabisi Onabanjo University International School, Ago-Iwoye, Ogun State, Mariam Ayolola Kaka, who emerged the overall winner of a global art competition has given a scholarship and bursary awards to needy students in the state.

Kaka who is the daughter of a former Deputy Governor of the state, Senator Adegbenga Kaka, had outshone over 4,000 participants in the international art competition entitled “Fight for Freedom” organised by a charity group, Never Such Innocence,” with her artwork entry: “Nostalgic Salutation to Fallen Heroes.”

Following her excellent performance in the competition, held on the 29th of February, 2020, the young Kaka received compensation in cash and kind from some well-meaning Nigerians, most of whom are alumni of Molusi College, in Ijebu-Igbo.

She made a donation of N100,000 in scholarship to Miss Olubanjo Esther, an SS 3 Science student of Olabisi Onabanjo International School and 25, 000 cash donation to her Creative Art teacher, Mr Salisu Olatunde.

She expressed her readiness to commence an annual award of N10,000 to the best student in Creative Art in Molusi Secondary school annually.

The young Kaka encouraged her fellow students not to limit themselves in their quests to be greater in life.

ALSO READ: Gombe gov swears in Igbo man, one other as Special Advisers

She said, “I want to encourage my fellow students to participate in competitions that will give them a platform to showcase their God-given talents. There’s no limit to where we can get to but we must make efforts to make our talents known to the world so that we can be celebrated.

“I must sincerely appreciate the effort of my parents for helping me to bring out the best in me and for encouraging me to do better. Also, my Creative Art teacher, who helped in sharpening my skill, I want to say a very big thank you.”

Senator Kaka in his remarks at the ceremony said the gesture was a form of encouragement to other students.

He said, “After Mariam got cash compensation from some well-meaning people, must of whom are alumni of Molusi Secondary school, I called and asked her what she would love to do with the money and Mariam said there were some students in her school whose parents usually find it difficult to pay their school fees and she would like to render financial support.

“I advised her not to limit the donation to only her school but also to Molusi College since most of her donors are alumni of the school.”