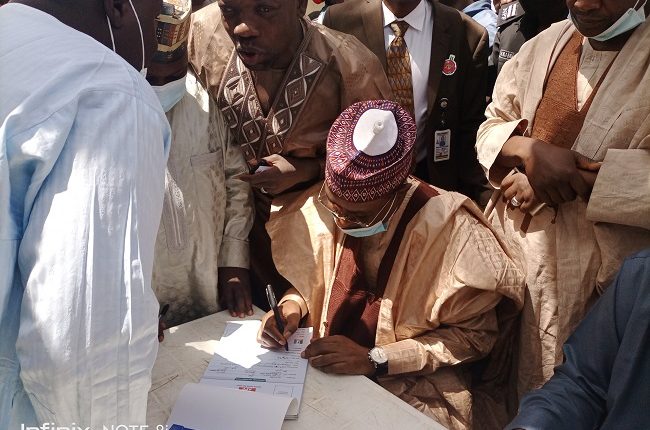 Former Bauchi State Governor, Malam Isa Yuguda, on Monday, revalidated his membership of the ruling All Progressives Congress (APC) describing the exercise as very important for reshaping the structure for the challenges ahead.

The former Governor participated in the revalidation exercise at his polling unit located inside Destination Bauchi Hotel in the Dankade ward of Bauchi LGA.

Speaking with journalists shortly after his membership was revalidated, Isa Yuguda described the turnout as massive opining that the leadership of the party in the state has done well in mobilising members of the party to come out to participate in the exercise.

Isa Yuguda commended the National Secretariat of the APC for the exercise saying that it has given every member of the party a sense of belonging which he opined will make the party more firmly rooted particularly at the grassroots across the country where the majority of the voters are based.

He described the revalidation and registration exercise as very successful and transparent which has made the turnout to be very impressive considering how members are coming out to be registered saying, “it is most encouraging and I want to urge those that are yet to do, to come out more so it has been extended by 3 weeks.”

On the 2023 general election, he said: “Power belongs to God and He gives it to whoever he so wish and at the right time. We rely on God. You can foresee tomorrow, so, let’s wait for tomorrow before we can make a decision. There are the wishes of my supporters based on what we have done in Bauchi but as I said, I cannot decide what happens tomorrow.”

The present administration in the state led by the Governor, Sen Bala Mohammed Abdulkadir, is doing its best, until he is done, one cannot assess him. Let us allow him to finish his assignments before we appraise him. So far, I think he is doing well.”

He however said that the administration can still do better because according to him, “people of Bauchi State including me are yearning for development. So, the Governor must be ready to provide effective leadership.”

In his brief remarks, State Caretaker Chairman of the APC, Uba Ahmed Nana, commended the former Governor, Isa Yuguda, for coming back home to participate in the exercise saying that it was a demonstration of humility and good leadership.

Uba Nana also called on other chieftains of the party to emulate what was done by the former Governor saying that the party is bigger than any individual and assured that a level playing ground has been created for every member to be part of the exercise.