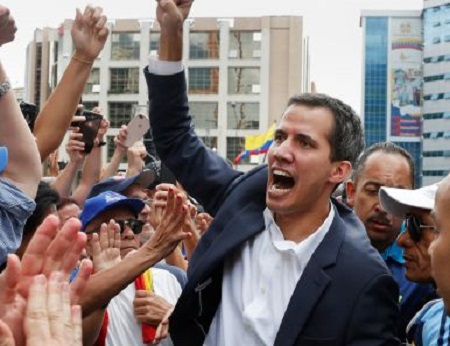 Venezuela has plunged into a major political crisis amid a growing row over President Nicolas Maduro’s future as the country’s leader.

The coordinated move from the major European nations came after the expiry of an eight-day deadline they set last weekend for President Nicolas Maduro to call a new presidential vote.

In a Twitter post on Monday, French President Emmanuel Macron said his country recognises Guaido as an “acting president to implement an electoral process”.

Angela Merkel, the German chancellor, during a visit to Japan said Guaido, who heads the opposition-led National Assembly, “is the legitimate interim president”.

Sebastian Kurz, Austria’s chancellor, also tweeted that Guaido can rely on Austria’s “full support in his efforts to re-establish democracy in Venezuela”.

Russia has criticised what it said were attempts to interfere in Venezuela’s domestic affairs after major European countries recognised Juan Guaido as the South American country’s interim leader.

Such interference, he added, could not facilitate the “peaceful, effective and lasting settlement of the crisis the Venezuelans are going through”.

Peskov reiterated Moscow’s position that only the people of Venezuela could solve the crisis “which they should get through on their own”.

“Denmark recognises the President of the National Assembly until new free and democratic elections take place,” Anders Samuelsen, the country’s foreign minister, tweeted ahead of a meeting with EU counterparts in Brussels.

Netherlands, Latvia and Lithuania also threw their support behind Guaido.

Don’t allow politicians use your children for electoral violence ― Ajimobi

US and Russian diplomats to hold Venezuela talks in Italy

All US diplomats have left Venezuela, says Mike Pompeo