EU-UNICEF spends N17m on mother and child health in Bauchi 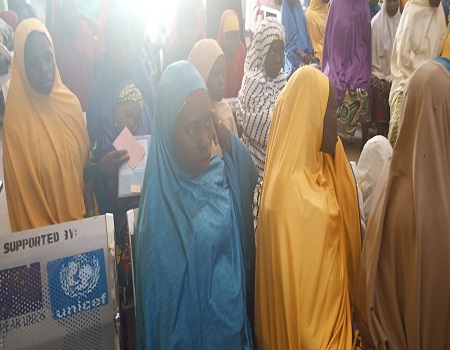 In its determination to promote mother and child health particularly among rural dwellers who live in hard to reach (HTR) villages, EU-UNICEF collaborative initiatives has spent over N17m in its Conditional Cash Transfer (CCT) which is a Social Protection Program (SPP) to pregnant women and nursing mothers in Gwasamai village of Katagum LGA in Bauchi state.

The intervention is aimed at strengthening Primary Health Care (PHC) and Community Resilience for Improved Maternal, New-born, Child Health and Nutrition (MNCH) in the state.

While speaking on the program during a working visit there by our Correspondent, Chairman of the Community Development Committee for the management of the programme, Wadau Ya’u commended the initiative saying that it has helped in promoting mother and child health in the area.

He added that the incentive given to the women has increased awareness about family health issues among the people stressing that men who do not have enough money to care for their pregnant wives and under 5 children have embraced the program fully.

The community leader then appealed that EU-UNICEF should not end the program but rather extend and expand it because according to him villages that are currently enjoying the program are up to twelve.

In her contribution, the Women Leader in the area, Adama Ibrahim expressed happiness with the program saying that it has saved the lives of many pregnant women and their children as they are given adequate attention each time they visited the facility.

Adama Ibrahim also appealed for the continuation and expansion of the program so that more women will benefit from it thereby promoting family health.

The Community Health Officer (CHO) in charge of the facility, Babaji Kabir disclosed that since the inception of the program, attendance at ante-natal and post-natal have doubled to the extent that the facility at Gwasamai is becoming overstretched.

He added that with the support of the community management committee, the program has become well accepted by the people of the area.

In their various responses, some of the beneficiaries, Ummi who is nursing a 4 months old Aisha commended the sponsors of the programme saying that it has helped to keep women and their children alive and healthy while Tabawa Yushau who is carrying her 10th pregnancy said that she has seen a tremendous positive change in her health since embracing the program.

As for 6 months old pregnant Salamatu Abdullahi whose village is about 3km to the facility, the program has positively impacted in her life saying that since she embraced it, her health status has changed dramatically promising that she will continue to attend the facility for ante-natal until she gives birth.

All of them are however united in appealing that the duration of the programme should be extended so that more women and children will benefit from it.