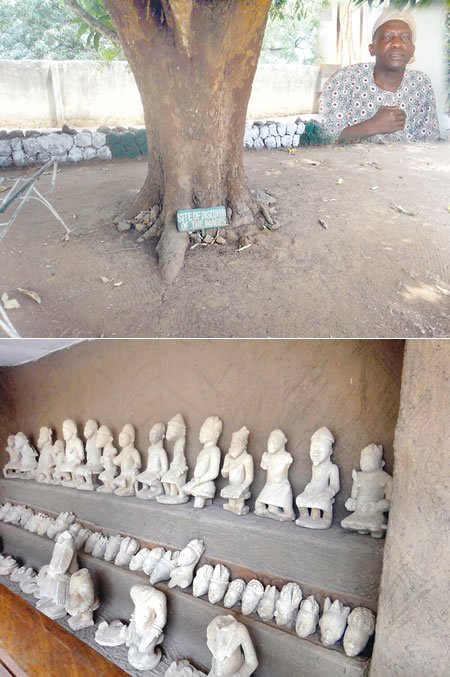 ESIE is an ancient Igbomina town in Irepodun Local Government Area of Kwara State, and it is situated some kilometers away from Ilorin, the state capital. Esie is generally known as the home of 800 soapstone figures.

Esie museum happens to be one of the early museums in the country, and inside it stand some 800 mysterious stone images whose origin has remained unknown till date.

Since their discovery 240 years ago in a forest near the community, no one has been able to solve the puzzle of how the figurines came to be.

The origin of the soapstone is bewildering, but according to inhabitants of the town, the 800 figurines were rebellious settlers who were turned into stone images by the gods. However, some believe the stone sculptures were works of men.

Digging further on both views, an explanation on the rebellious settlers has it that they were from another tribe in Yorubaland, and they had sent messages to the Elesie, the king of Esie, that they were coming to settle down in his domain, however, to their disappointment, they were not accepted by the Esie people, and as a result, they decided to settle outside the city.

After a while, the settlers became a threat to the security of Esie, as they were undermining the administration of the king. It even got to a point they attacked the town, which made the god of the land turn them into stone figures.

The figures are realistic representations of men and women, who are seated on stools or kneeling. Royalty and well-being depict these collections, with many of them adorned with beads and headgears.

Some play musical instruments, some are found sitting in circles, while the king, Oba Ere, is in the centre. However, the explanation that rebellious people were turned into stones does not add up.

Another school of thought believes the Esie figurines are some artworks from an unknown artist who could have been a traveller, or who chose to keep the artworks in a forest until they were found. The artists could have died before anybody could have known him for his works.

Lessons for man from the wild