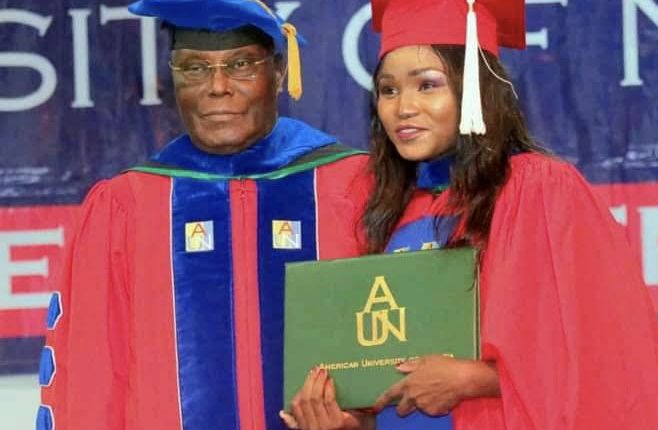 One of the lucky girls that escaped from the abduction of Boko Haram in the 2014 attack on Chibok Girls Secondary School, Mary Katambi has graduated bagging a Bachelor of Science in Accounting from the American University of Nigeria (AUN), during the 12th commencement ceremony held in Yola.

Mary Katambi was one of the three girls that were offered scholarship by former Vice President Atiku Abubakar from Secondary School to University under the supervision of the Margee Ensign scheme of the University.

In her welcome remarks, the President of AUN, Margee Ensign charged the graduating students to be firm and committed wherever they find themselves to make their parents, and the varsity as well as the society proud.

Ensign Margee believed that with the kind of rigorous academic training the graduating students went through in the University, they should surely excel as they go out to be part of the society thereby making the institution proud.

In his keynote address after being conferred with honorary Doctor of Humane Letters by the AUN, Doctor Akinwumi Adesina, President African Development Bank Group dwelled extensively on building the capacity of Nigerian youths for greater impacts.

Akinwumi Adesina also said that agriculture is the biggest asset Nigeria has and called for structural transformation in the sector.

He said that the African Development Bank will continue to invest heavily in the agricultural sector to raise productivity through supporting women towards accessing land, and provide them with other farming necessities.

The President, however, decried the high level of malnutrition in the society which he described as unacceptable, recalling how about 30 million people lost their jobs last year due to Covid-19 pandemic in Africa.

In his remarks, the founder of American University of Nigeria, Yola, former Vice President Atiku Abubakar advocated for the African Development Bank to consider supporting the private sector more in the agribusiness.

Alhaji Abubakar who owns a microfinance bank said that the bank has lifted 45,000 families out of poverty and called on the bank to assist the women in agriculture.

The event was attended by former Vice President Atiku Abubakar who is the founder of the AUN, Yola, Governors Ahmadu Umaru Fintiri and Simon Lalong of Plateau State  among other top government functionaries, captains of industries, dignitaries and parents within and outside Nigeria.