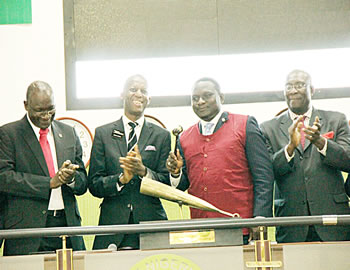 The Nigerian equities market opened the week on a bearish note as persistent sell-offs in large-cap stocks drove the broader index 14bps lower. On Tuesday, there was a change in sentiment as equities rebounded 0.2 per cent on account of price appreciation in bellwethers. However, the benchmark trended southwards on Wednesday and Thursday by 0.4 per cent and 0.1 per cent respectively.

The All Share Index rose 0.4 per cent on Friday as investors sort for bargains. Consequently, the stock market declined 0.2 per cent W-o-W to close at 28,805.45 points. YTD return settled at 0.6 per cent, while market capitalisation declined N17 billion to N9.9 trillion. Activity level during the week also improved as average volume and value traded rose 21.7 per cent and 49.6 per cent to 229.9 million units and N2.7 billion respectively.

Performance across sectors was mixed for the week. The Industrial Goods index led sector gainers, up 1.5 per cent W-o-W. The Consumer Goods index followed, appreciating 0.9 per cent on account of gains in Nigerian Breweries Plc (+3.1 per cent) and Nestlé Nigeria Plc (+0.2 per cent).

On the contrary, the Oil & Gas and Banking indices declined 1.3 per cent and 0.2. Per cent respectively against the backdrop of losses in Oando Plc, Mobil Plc, Ecobank Transnational Inncorporated Plc and Guaranty Trust Bank Plc at 14.5, 4.4, 5.4, 0.8 per cents decline respectively. Likewise, the Insurance index declined 1.8 per cent for the week.

Sentiments improved this week albeit soft as market breadth settled well with 21 stocks advanced while 37 declined.

Honeywell Flour Mills of Nigeria Plc led the best performers for the week with 14.8 per cent, followed by Zenith Bank Plc at six per cent, while Livestock Feed Mills Plc gained five per cent.

On the other hand, Skye Bannk Plc continued it’s descent as it led the declining stocks with 31.0 per cent. NPF Microfinance Bank Plc lost 0.9 per cent while Transnational Express Plc declined by one per cent.

Analyst at Afrinvest however believe that this week performance would be shaped by further influx of H1:2016 corporate earnings. So far, few companies had released their H1:2016 financial result, with Access Bank Plc notifying the Exchange on the late filling of its financial statement.