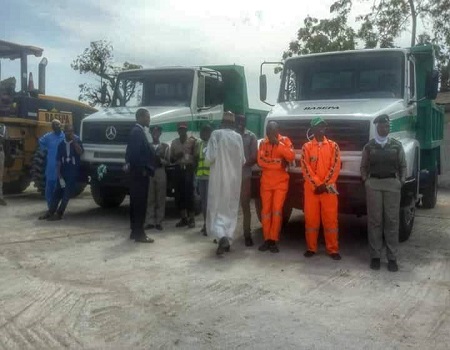 This was disclosed by the Bauchi State Governor, Sen Bala Mohammed Abdulkadir while speaking during the commissioning ceremony of waste collection centers (Phase I) at Bakin Kura within the metropolis on Thursday saying that to further demonstrate commitment to the waste disposal issue, the project has been designed and built to last test of time,  with an expected utilisation period of 20 years.

The Governor who was represented by the Commissioner of Environment and Housing, Alh Mu’azu Hamisu Shira, also said that he has approved the release of N9.7m for Bauchi State Environmental Protection Agency (BASEPA) for the repairs of all the agency’s equipment for prompt evacuation of refuse in all major towns in the state.

Bala Mohammed also commended the efforts of the management and staff of the Agency for the job so far done, through direct labour maintaining that the collection centres will regulate the orderliness and proper manner of solid waste disposal and its subsequent evacuation to the approved landfills sites at the outskirt of the city and its conversion from waste to wealth.

In his speech, the Emir of Bauchi, Dr Rilwanu Sulaiman Adamu who was represented by the Chairman Bauchi, Nuru Adamu Jumba called on the people to maintain and support the strides by making sure that there is strict compliance in dumping refuse henceforth to the designated centres.

Members of the community where the project is constructed appreciated the effort of the government assuring that they will utilise the gesture for the overall sustainability of Environmental friendly posture.