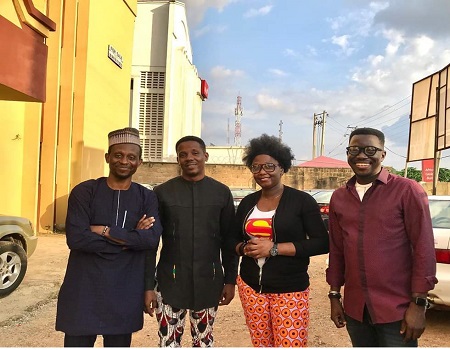 The need for Entertainers to employ creativity as a means for survival has become very important in present-day, owing to the impact of the COVID-19 pandemic currently ravaging the world.

This was one of the major points from a web conference organised via Zoom by award-winning music producer, songwriter and author, Gbade Adetisola recently. The webinar, with the theme,

“The new realities of the entertainment industry,” had panellists drawn from various sectors of the entertainment industry namely Big Bolaji, a popular gospel artiste; Funke Martin Luther a. k. a Blaise, music produce, wordsmith and rapper; Oladipo O’ Fresh, a filmmaker, among many others. The event was watched by many stakeholders across the world.

During the event, many of the contributors harped on the need to explore exciting new ways to engage the public, who now have so much content to sift through online.

Funke Martin Luther, in her submission, stressed that entertainers must realize that the social media space has become overloaded, such that people needed new thrills and ideas.

“The social media space is saturated with so much content that it is confusing. People just post anything for clout. The real creatives need to step up their game and become unique such that they can stand out of the crowd. It’s no longer business as usual where many rely on luck to gain followership. Today, content is king”, she said.

Big Bolaji also added that the latest set of entertainers around his age bracket had become lazy and had a know-it-all attitude.

“This is the time to seek knowledge, retool and better your craft. But our people are lazy. They do not seek growth and would complain when things don’t go their way. Most entertainers are doing the same thing as they have always done.

The public is wiser now and has a wide range of content to choose from. So, if you don’t work harder, it is your loss”, he said.

Some of the participants who were part of the online event also gave perspectives and comments about how they have had to use the time offered by the stay-at-home order to learn more about the entertainment business.

Abobade Idris Olalekan, one of the few record label owners and lifestyle influencers in the city of Ibadan, in a chat with Tribune Online after the webchat, said that he had learnt new techniques to engage as an entertainment investor.

“I had been worried about my artiste, Blaq Dim and how to keep him engaged at the moment and after hearing various submissions, I think the label has to explore new options. He dropped a new song last week and we will find a way to connect with his fans better. Putting out engaging content is the deal now more than ever in order to gain attention and I will ensure that. My focus is on making Kobi Mighty records the most searched label in Ibadan and the South-West”, he said.

Poland to extend ban on international flights to June 16