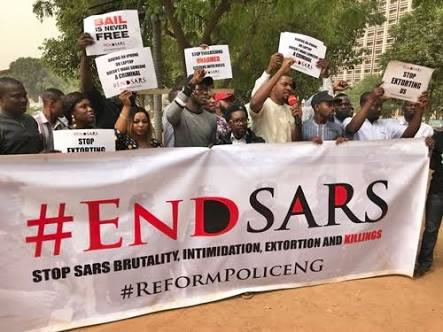 The Egbe Ilosiwaju Yoruba, a Pan Yoruba group have sympathised with the people of Lagos State and South West over the loss of properties resulting from recent #EndSARS protests that rock the nation.

The Yoruba group also sympathised with the former governor of Lagos State, Senator Bola Ahmed Tinubu on the attack on his businesses by hoodlums during the protest.

The Yoruba group in a communique issued at the end of its meeting advised the federal government to make conscious efforts at identifying families that lost loved ones and ensure that every necessary step was taken, to compensate those who suffered a loss of property during the protest to hasten the healing process.

The communiqué signed by the leader of the group, Senator Olabiyi Durojaiye and secretary, Mr Bayo Aina called on APC leaders to commence a review of the report of the El Rufai/Adetunmbi Committee on restructuring which was set up in 2017 with a view towards presenting same for legislation in order to move the nation forward on the issue of the review of the 1999 constitution.

“We sympathise with Lagosians and our people across the Southwest zone such as Asiwaju Bola Ahmed Tinubu, the Oba of Lagos and Soun of Ogbomoso whose personal properties were affected including those and many other people from the region and other places in Nigeria whose daily living might have been affected by the consequences of the protest.

“We call on leaders of the APC to commence a review of the report of the El Rufai/Adetunmbi Committee on restructuring which was set up in 2017 with a view towards presenting same for legislation in order to move the nation forward on the issue of the review of the 1999 constitution” stated the group.

On the recent #Endsars protest, Afenifere Egbe llosiwaju Yoruba agreed not only with the need to end all forms of brutality against citizens by the Police but called for an end to the brutality, arbitrariness as well as a gross abuse of power and privileges in all areas of our national life.

While commiserating with all victims including civilians and armed forces, and their relatives for loss of lives, livelihood and properties, the group advised that going forward, the best propitiation will be the enthronement of good governance at all levels of Government, particularly across the Southwest zone, which bore a disproportionate brunt of the carnage, relative to its ability to meet the demands of the protesters.

The group also “commended all the Executive Governors of the South-West states, particularly Governor Babajide Sanwoolu, whose State; Lagos State became the epicenter of the protest for their prompt and proactive steps in assuring the protesters that their grievances had been communicated to the appropriate quarters for the necessary attention.

“We salute the courage and resilience of all the gallant law enforcement officers who not only had to manage the opprobrium on their reputation by the activities of the bad eggs in their midst but at the same time had to restore law and order across the nation in a very hostile environment.

“We commend all the governors across the South West for setting up various mechanisms to assess the nature and extent of damages suffered by Nigerians in the hands of SARS as well as in the hands of the rampaging rioters. The Governors’ initiative in establishing “Amotekun” appeared to have been justified.

“Human life is irreplaceable, nonetheless we suggest that families that lost loved ones be identified and every necessary step taken, including monetary appeasement while those who suffered a loss of properties be adequately compensated. Perhaps this may hasten the healing process” reads the communiqué in parts.

The meeting observed a minute silence in memory of its past National Leader, Senator Ayo Fasanmi,  Chief S. M. Akindele and Senator Isiaka Ajimobi, immediate past Governor of Oyo State and a host of hard-working citizens who lost their lives to Covid 19, Endsars- related and other Mishaps in the course of the year.

You have the right to challenge freezing of your bank accounts in court, Akeredolu tells #EndSARS Protesters