#EndSARS: They were stoning us, we knew we were in danger ― Soun of Ogbomoso 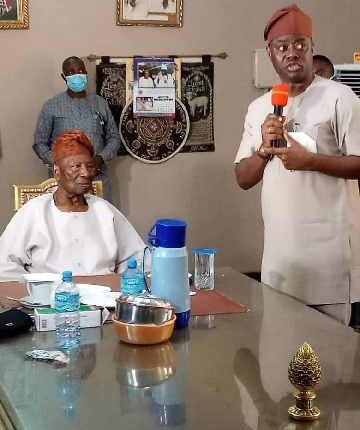 The Soun of Ogbomoso land, Oba Jimoh Oyewumi, on Tuesday, recounted that he and others in the palace assumed a state of danger as protesters overran the palace pelting windows with stones, smashing vehicles and other properties on sight, upturning furniture on Sunday.

Following the killing of Jimoh Isiaka and two others in the #EndSARS protests in Ogbomoso by yet-to-be-named policemen, some residents of the town had in venting their anger, attacked the Soun’s palace.

As stones rained upon the palace, Oba Oyewumi said he kept wondering why the palace was the subject of attack by the #ENDSARS protesters.

The monarch who shared his experience when Governor Seyi Makinde visited the palace to assess the level of damage, tasked government at all levels to provide employment for the people to stem such attacks.

Oba Oyewumi particularly charged Makinde to see to the engagement of the people by making provisions across zones of the state for people to learn and master their choice crafts, vocations.

“I appreciate your concern about this incident. The country relies on political office holders to care of their areas. We are not very happy to see our youths moving about without any job, and that is why they have a bad mind to do bad things.

“Therefore, it should be government concern to look for jobs for the youths so that they will desist from parading themselves here and there without doing anything concrete.

“When you get to your executive council meeting, make provision in each zone of the state for the youths so that they are engaged. It could be in form of ensuring people learn and master the craft they love, vocational training across the state. You can also give money to the uneducated and mandate them to learn a craft,” Oba Oyewumi said.

While decrying the attack on the palace as unexpected, Makinde announced a donation of the sum of N100 million to fix the destruction of the palace and vehicles.

He attributed the level of destruction to built-up anger, idleness, unemployment of several youths.

Describing unemployment in Nigeria as a time bomb, Makinde said the Ogbomoso palace attack was a wakeup call on the nation’s political leaders to effectively address burgeoning youth unemployment.

Makinde said: “The level of destruction is unexpected. I accept that peaceful protest is legitimate and constitutional but this kind of destruction shouldn’t have happened at all.

“At the heart of this is not just SARS but built-up anger, in addition to lockdown, COVID-19, unemployment. I sincerely ask you not to feel offended as those behind the destruction are your children. This is part of the price that we have to pay for the current state of the country.

“We’ll do everything to ensure to renovate the palace such that it is better than the way it was before the destruction.

“We have to replace the windshield of some cars while there are those that the cars have to be totally replaced. I will ask the Ogbomoso local government Chairman and the Commissioner for Local Government and Chieftaincy Matters to assess the situation.

“I’ll release N100million to begin necessary repairs in the palace. If you don’t do what is right to find things for these people to do, this will be a tip of the iceberg. The devil finds work for idle hands.

“Majority of our youths are engaged so they utilise any opportunity to vent their built-up anger. They embarked on the destruction of the palace to attract the attention of the government.

“It is a wakeup call for us as leaders to ensure that we quickly look at things to do to ensure that the youths are engaged otherwise this will definitely continue.

“Protest should be peaceful. Unemployment is a time bomb. We take responsibility for this. We will engage the people.”

On a condolence visit to the families who lost their lives in the Ogbomoso protests, Makinde donated N1million each to the three families.

Speaking at the house of one of the victims, Makinde also assured of speaking with the Commissioner of Police, Joe Nwachukwu to effect the release of corpses to the various families before the end of the day.

He also assured the affected families that persons behind the killings will be brought to book while promising further support for the victims’ families.

While speaking at the police area command, Owode, Ogbomoso, Makinde promised the residents whose motorcycles were seized by the police that they will have them released before the end of the day.

#EndSars: They were stoning us, we knew we were in danger ― Soun of Ogbomoso

Murdered Warri chief priest was not our grandson ― Alawuru family