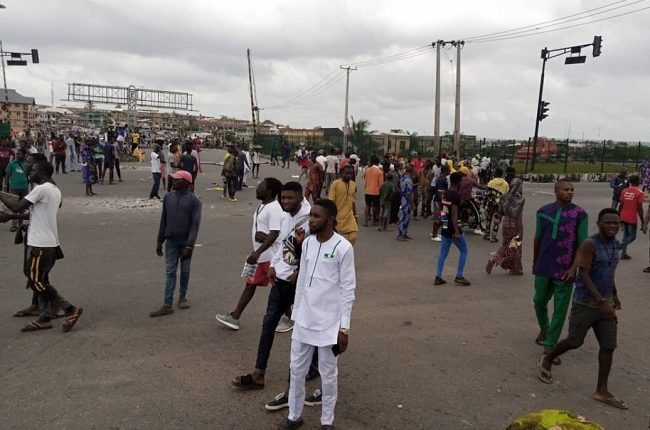 The atmosphere of Osogbo, Osun State capital this morning was tensed as #EndSARS protesters threatened to face sponsored armed thugs war for war and fire for fire if they show up today as they did on Thursday.

The #EndSARS protesters took over strategic places of the town with the affirmation that there would be no retreat, no surrender, warning thugs to stay off.

A 16- seated bus believed to belong to the thugs was given a hot chase by the protesters leading to the detouring of the vehicle to an unknown place.

The angry protesting youths who threw stones and other objects at the bus to prevent it from coming closer to them also chased away some motorcyclists believed to be sponsored against the protests.

All commercial activities in the area were paralysed as vehicles plying Gbongan- Ibadan road could not move due to the gridlock.

The protests are still on as of the time of filing this report.

The All Progressives Congress (APC) has told a Federal High Court in Abuja, that the Comrade Adams Oshiomhole-led National Working Committee (NWC) was sacked to solve the internal leadership crises rocking the party…Tension in Osogbo

The party also said that immediately the Caretaker/Extraordinary Convention Planning Committee was put in place after the NWC’s dissolution, the crises that had characterised its affairs were laid to rest…Tension in Osogbo

His son, Aminu Shehu Idris, confirmed in an interview with the Tribune Online that his late father who was appointed on 15th February, 1975 and spent 45 years in the throne died on Sunday after a protracted illness…Tension in Osogbo  Tension in Osogbo