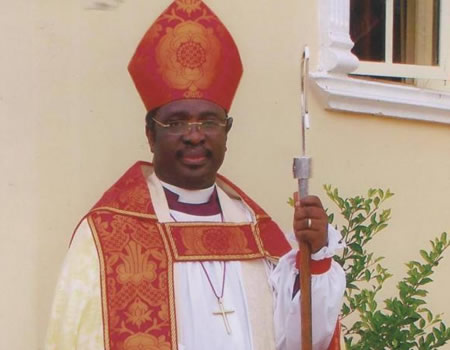 The Bishop of the Anglican Diocese of Lagos, Dr Humphrey Olumakaiye, has beseeched Nigerian Youths to avoid mob mentality and seek redress without subscribing to violence in their agitation for the proscription of the Special Anti-Robbery Squad (SARS) of the Nigerian Police Force.

The Anglican Bishop made this known in a statement titled “Towards the Nation of our Dream” issued to Tribune Online in Lagos.

Humphrey also appealed to the youths not to allow themselves to be weaponised by enemies of progress of the country.

“I charge all our youths to avoid mob mentality, seek redress without subscribing to violence and we shall all live to see the Nigeria of our dream in Jesus name.

“However, we strongly appeal to our youths not to allow themselves to be weaponised by enemies of progress of this country, those who do not encourage and reinforce positive values that can bring about a Nigeria we can all be proud of.

“Now, we can boldly say that we are tilting towards a Nigeria where a child of nobody can become somebody without knowing anybody.

While speaking on the issue of SARS, Olumakaiye said that the church is not putting its head in the sand.

He said that this is because it is a genuine agitation and borne out of deep concern for the future of the country.

The bishop applauded the government for given prominence to the voice of the citizens, thus making the police authorities put an end to the unit.

“With the recent uproar in our nation and in fact across the globe, on social media and on our roads about the #EndSARS agitation; the church of God is not putting her head in the sand expecting issues to redress itself.

“This is a genuine agitation and it is borne out of deep concern for the future of this nation.

“It delights us to see that the Government in a time like this has given prominence to the voice of the citizens, thus making the Police authorities put an end to the unit.

“We now ask that this decision should not be a statement written on paper and made by mouth alone. Sincerity of purpose should guide them to follow through on their proposals to consult stakeholders and enact the much-needed reforms of the entire police force.

“We appreciate our youths for exhibiting unparalleled interest towards the betterment of this nation and not losing hope in the bright future we all long for.

“You have really shown that together we can make the difference we desire and bring the Nigeria of our dreams to reality,” Olumakaiye said.

Rape cases will no longer be bailable soon ― FCTA