•Says leadership has failed the nation 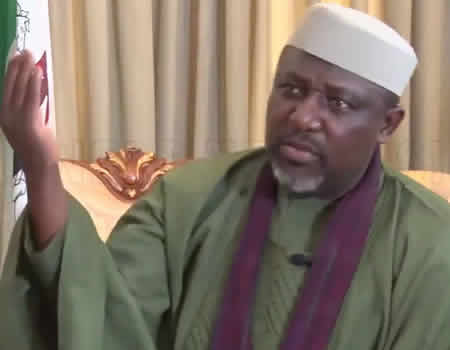 Immediate past Imo State governor and senator representing Imo West senatorial district, Rochas Okorocha has said the movement for the reform of the Nigeria Police Force and proscription of the Special Anti-Robbery Squad (SARS) tagged #EndSARS protests was a reaction to years of bad leadership in the country.

Speaking with newsmen in Abuja at the weekend, Senator Okorocha said the protest which he described as genuine was a wake-up call to the political elite to be accountable and alive to their responsibilities.

He said: “What started a few days ago as a peaceful protest has escalated into losing many souls and burning properties with people living in fears. This situation is very unfortunate and highly regrettable. I want to sympathise with those that have lost their loved ones due to the protests.

“However, I want to say that this is a wakeup call by the youths of this country to the leaders of this nation. It is a pointer that we the elite have been selfish in handling the affairs of this country. There has been a track record of unfair leadership for a long time.

“The #EndSARS protest is not just targeted at police but a disappointment over economic issues in a nation where we have joblessness and poverty for the youths. While commending President Buhari for the actions taken so far, especially in reassuring the youths of meeting up their demands, we must also act quickly under this present situation to prepare for the future.

“Today, we have millions of out of school children in the country, it is another time bomb for tomorrow. While the situation is getting under control, government and leaders must rise to their responsibilities to ensure that such future occurrences did not happen again.

“Yes, it was anchored #EndSARS, the Nigerian youths are not against the police but against a certain segment of the police formation. So, killing innocent policemen/women and military personnel is really uncalled for. The social media have not helped matters in this period especially when people are posting old pictures and making them look like current ones with people believing in it and acting otherwise.”

The former Imo State governor maintained that those holding elective positions in the country must be prepared to make sacrifices to mitigate the sufferings of the people as he noted that their lifestyles provoke ordinary Nigerians.

He specifically advocated 50 to 70 per cent cut of lawmakers, governors and Ministers income “so that the youths will also have a sense of belonging that the leaders are making a sacrifice.”

“The truth is that our lifestyle provokes youths. We must call on leaders, the legislatures and executives, to change our lifestyle as a mark of sacrifice. It is not necessarily because they are comfortable with what they get. “And even when they get, they have thousands of people that supported them in addition to the extended family system in Africa.

“There are in-laws, friends, classmates, political associates and at the end of the day, the federal house members end up in penury. However, I strongly advocate that the legislatures and executives must make sacrifices from their salaries and allowances as a way of ameliorating the situation the youths are facing.”