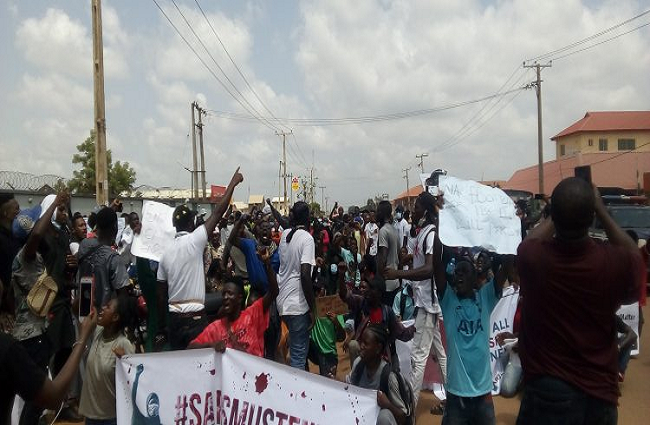 Hundreds of youths besieged some parts of Kaduna State in the early hours of Tuesday to protest the activities of the Special Anti-Robbery Squad (SARS).

Some of the protesters, who trekked from the popular station roundabout along Kachia road under the watch of the police and civil defence stopped at waterboard, Barnawa in Kaduna metropolis.

Some of the protesters held placards which read: “This is not political, we are fed up with SARS”, “Nigerians are not armed robbers,” “we say no to SARS,” “SARS is a disgrace to our country.”

Another protester who gave his name as David Hassan said they came to the street to express their dismay over the activities of SARS in the country.

He said Kaduna is not an exception while narrating how he was molested by SARS six months ago on his way to school when they saw him sitting down by the roadside.

“They told me to enter their vehicle and took me to their office at Gabasawa and beat the hell out of me until I was later granted bail for no offence,” he said.

Intermittently, security operatives ordered the protesters to sit on the ground to prevent the crowd from breaking into adjoining offices and shops.

As at the time of filing this report, normalcy has returned as the protesters have returned to their respective homes.