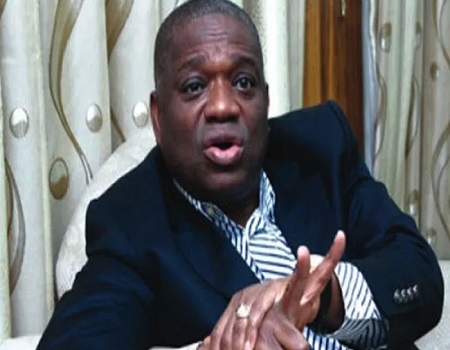 Former Governor of Abia State and Chief Whip of the Senate, Senator Orji Kalu has expressed sadness over the destruction of Ogbomoso palace during the #EndSARS protest in Ogbomoso at the weekend.

Condemning the ugly incident, the former Governor, who is also the Aro of Ogbomoso, stressed that in as much as peaceful protests are allowed by law, hoodlums and thugs must be prevented from taking advantage of any protest.

While commiserating with the Soun of Ogbomosoland, Oba Oladunni Oyewumi, the Chief Whip of the Senate, described the monarch as an advocate of peace and unity, stressed that the incident must be deeply investigated by appropriate authorities in order to bring the perpetrators to book.

Kalu while advising the youth across the country to be law-abiding and steadfast, commended the federal government for the dissolution of the Special Anti Robbery Squad (SARS).

The Senator said, “the attack on Ogbomoso Palace by irate youths during the #EndSARS protest in Ogbomoso at the weekend was needless. Kabiyesi had over the years, sustained peace and unity in Ogbomosoland and its environs.

“The Paramount ruler is a respected elder statesman, who is passionate about the development of his domain, Oyo state and Nigeria at large. The atrocity committed by the yet-to-be-identified hoodlums is highly condemnable. The appropriate authorities must swing into action immediately in order to avert recurrence.

“Peaceful protests are allowed by law but people should not use the opportunity to attack innocent citizens and leaders. The perpetrators of the ugly act must face the wrath of the law”.

While commiserating with Oba Oyewumi over the attack, Kalu applauded the monarch for his impeccable character and leadership qualities, adding that Ogbomosoland has witnessed unprecedented development under the paramount ruler.

The party also said that immediately the Caretaker/Extraordinary Convention Planning Committee was put in place after the NWC’s dissolution, the crises that had characterised its affairs were laid to rest. Ogbomoso