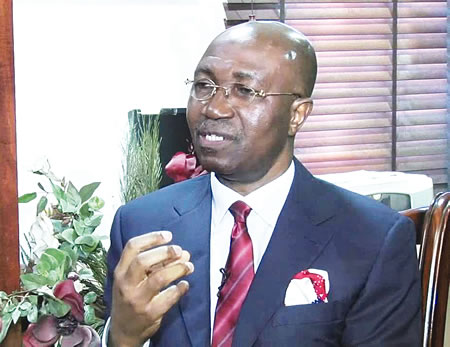 A renowned Lawyer and former President of the Nigeria Bar Association (NBA) Chief Wole Olanipekun, SAN has said the #EndSARS protests which nearly engulfed the nation was a microcosm of the danger that would consume the nation, if the country is not restructured.

He noted that the protest was a pointer to the fact the nation must be unpretentiously and carefully reawakened for it to be positioned for greatness across all sectors.

He expressed regret that the two police stations were burnt down in his Ikere Ekiti country home during the crisis, thereby putting policing system in jeopardy due to tactical withdrawal of the police from the community.

Olanipekun who spoke in Ikere Ekiti at the weekend while awarding scholarships to 143 students to mark the 2020 edition of his scholarship scheme and the launching of  the Wole Olanipekun Foundation to empower youth and downtrodden masses in Ekiti, called on individuals to partner governments to resolve youth unemployment and the attendant restiveness.

“The bitterness among ethnic nationalities is  so deep, and we need genuine reconciliation and restructuring of the polity.  That small sore has become cancerous and we need a radical surgery to extract it.”

The Senior Advocate of Nigeria maintained that the current constitution in operation would not bring about the desired progress , calling for a new constitution that would address the challenges in the country.

He said the National Assembly should listen to the people and give the citizens of the country a clean and pragmatic constitution before 2023, ” which can jurisprudentially be described as our grundnorm.”

According to him, the constitution in the country is not working , expressing his doubts that past and present president of developed countries would not have achieved successes, “had they operated or been saddled and encumbered with the type of constitution we presently operate in Nigeria.”

He added, “To achieve this end,  the National Assembly  must also come to the reality that we need the application of the doctrine of necessity for them to jettison whatever powers are vested in them by section 9 of the constitution to segmentally amend it according to the whims and caprices to we the people of Nigeria so that we can now sit down and give to ourselves a true , realistic and workable constitution.

“How do we expect the constitution to work when governors are mere district sherffis; emperors without empires; chief security officers who cannot hire fire, engage or disengage mere security details.

Even in terms of administering his state and average Nigerian governor must of necessity traveled down to Abuja at least twice in a month , at times to interface with a powerful federal Director or even Deputy Director in order to entice funds or facilities to his state.”

Tax policy in kogi is flexible and friendly — Gov Bello